Viral Photos That Everyone Forgot About

Posted by Sughra Hafeez in Entertainment On 24th July 2017
ADVERTISEMENT

We see them in our everyday life whenever we open up that Google tab on our computers, or simply pick up our phone. We’re bombarded with them every time we peek at Twitter or post to Facebook. Hell, we now can even see them whenever we decided to Snapchat at our favorite friends. They’re viral photographs that can sometimes spread like a venereal disease. Sometimes, if the photographs are lucky, they become viral memes and the world suddenly takes notice in the most hilarious way possible. This isn’t always a good thing for the people in the photos, but whatever – it’s a real hoot for us. There are some viral photos that turn out to be fakes, which can be both tragic and disappointing at the same time. Here are 15 viral photos that we all completely forgot about. 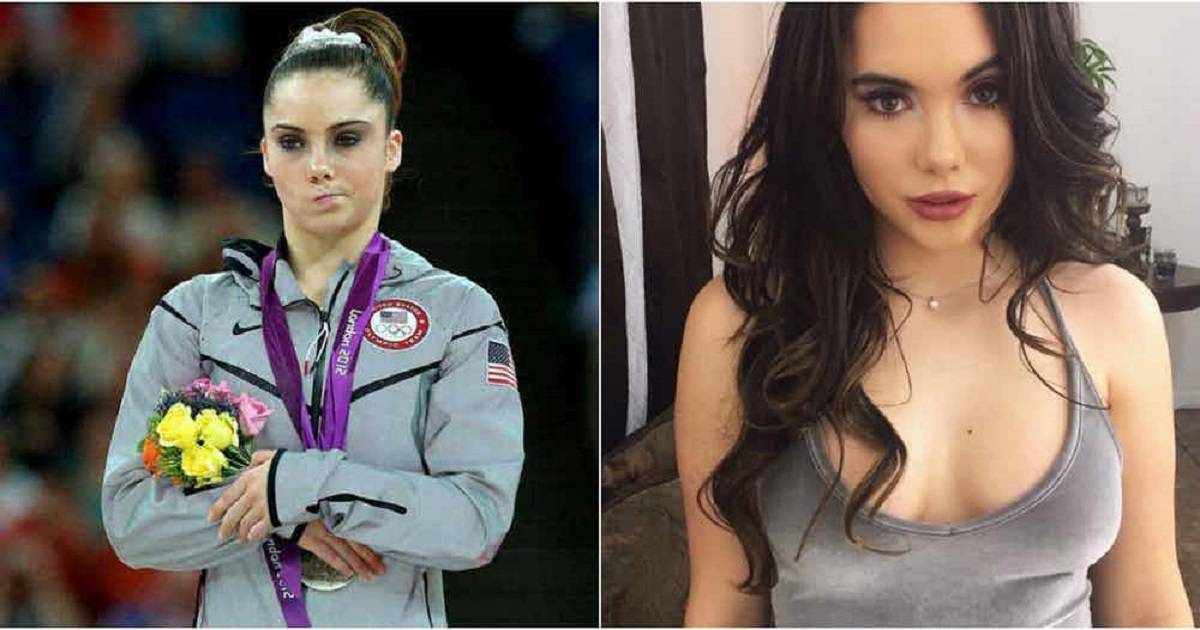 It depicts how the world will end based on the current state of politics. Appeared on YouTube in 2006, but first appeared on the Internet in 2003. 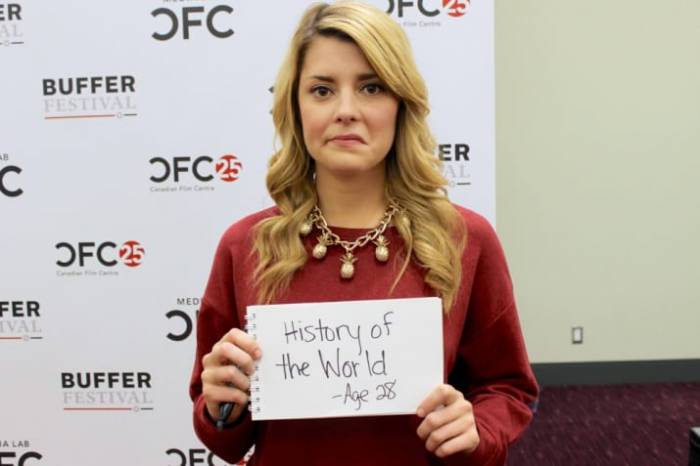 Boxman is a regular man, but has the torso and head of made of a box. Eyes and a smile are drawn on the box with a black marker, and other pieces of cardboard are tapes on to change his facial expressions when needed.

He wears a light brown short-sleeved shirt and blue jeans.

The origin of Boxman started when he was relaxing at home, "eating some Raisin Bran". Then, he noticed how pale he was and decided it was time to get a tan, so he grabbed his scissors (for reasons unknown) and ran downstairs. He forgot his house was a story tall, and missed the first step and fell. getting impaled by the scissors in the process. He ran outside to get help, blindly stumbled into the street, and he was run over by some cars (which were driven by Anthony Padilla and Ian Hecox) multiple times, mutilating his body to a near-fatal level. 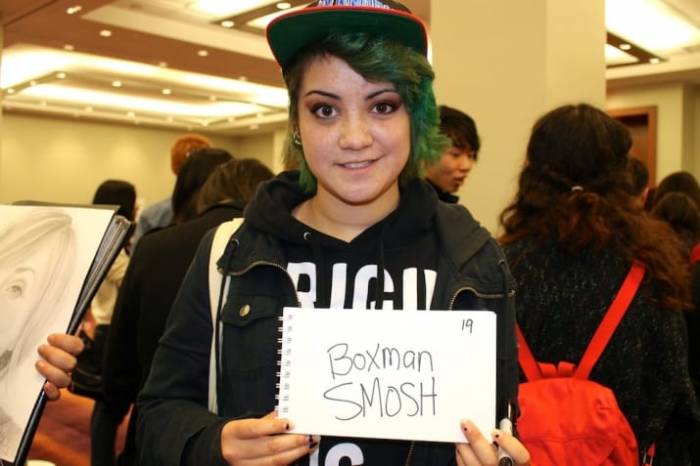 In 2001, Laipply originally performed "The Evolution of Dance", at which time it consisted of 12 popular dance songs of the late 20th century. Five years later, he uploaded a video of the six-minute performance to YouTube. The clip received 70 million views in under 8 months.At that time, it was rated on YouTube as:

#1 Most Viewed All Time Video on YouTube.com

#3 Most Discussed Video on YouTube.com

It has since been surpassed by other videos; the current most viewed video of all time on YouTube is "See You Again" by Wiz Khalifa (uploaded in 2015). 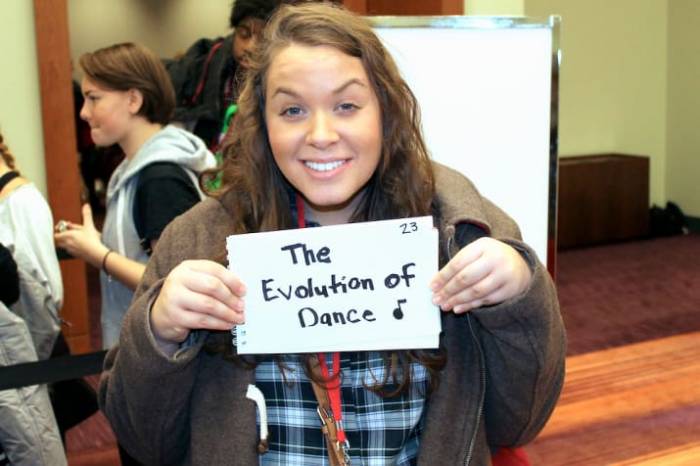 Back in 2012, a photographer captured a touching and heartbreaking photo of a man soothing his sick dog in Lake Superior. “John lives for this dog, and for the dog’s comfort,” photographer Hannah Stonehouse Hudson told the Huffington Post after her photo went viral. “My mother has a saying, ‘Everything is for the comfort and convenience of the Dog.’ John is a prime example of this.” So very beautiful. 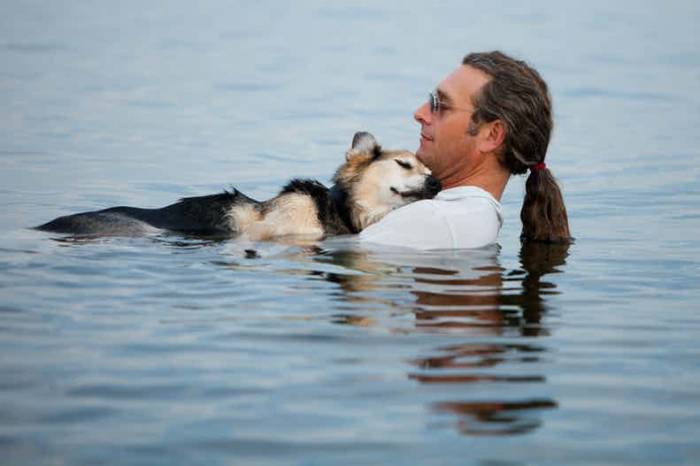 A few months ago, a photograph of a young Trudeau caught fire and the Internet went insanely ballistic. I mean, LOOK AT HIM IN ALL HIS DREAMY GLORY. IT’S LIKE HIS ABS WERE CHISELED BY A GREEK GOD AND HIS EYEBROW IS BREAKING OUR HEARTS. Twitter was aflutter with comments and googly eyes: “I’m just gonna look at this picture of young Justin Trudeau every time I need some more testosterone,” said @mcparty_. “Young Justin Trudeau could run me over with a semi and I’d say thank you.” Said @mrs_robinson0. Even though he’s still seriously hot on a completely different level, it’s always fun to just peer at a young Trudeau for a while. 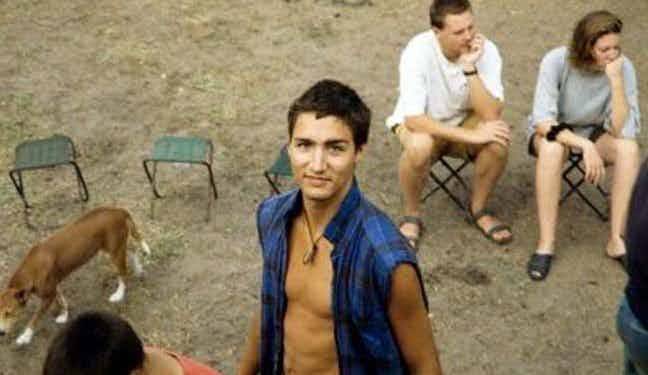 Zoe Roth wasn’t that old when she was dubbed “Disaster Girl” after a photo of her watching a neighbor house burn went viral. Her father was the one who shot the photo with his new digital camera. Her suspicious looking gaze seemed to set the internet on fire in a matter of minutes once the photo was uploaded. Zoe, now 16, still finds it hilarious.

Photographer Seth Casteel won numerous awards for the set of photos that featured dogs swimming underwater in pools.After the photos were posted to Reddit, people all over the world went crazy over the silly playfulness of the pictures. In one single day, Casteel had become an internet sensation. “I woke up to a bunch of money in my bank account,” the photographer explained to The Huffington Post during an interview where he said many people had ordered prints of his images. Sometimes going viral can really save a person. 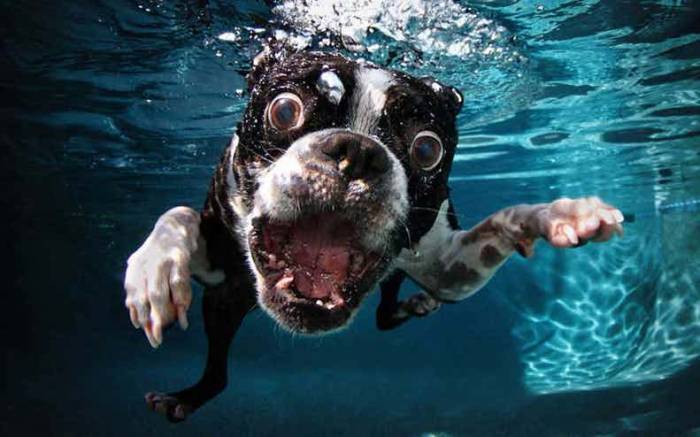 #8 Photo Bomber Of The Decade

Imagine heading out to the woods for a simple engagement photo shoot, only to get photobombed by mother nature herself. The couple sat down in front of a Vista and kissed for the camera, squirrels began to gather around them in order to get some nuts that hikers had left behind on the trail. “Somebody left nuts over there,” Marcin explained. “so we just waited until a squirrel picked up the nuts.” Once one did, they shot off around 50 images until they captured the perfect one.

Does anyone still remember Kony?

In 2012, a documentary titled “Kony 2012” was released by Invisible Children, an organization created to bring awareness to the Lord’s Resistance Army and their activities in Central Africa.

The film was part of a campaign to have Kony, the leader of the LRA, arrested by 2012 and the video quickly spread like wildfire. 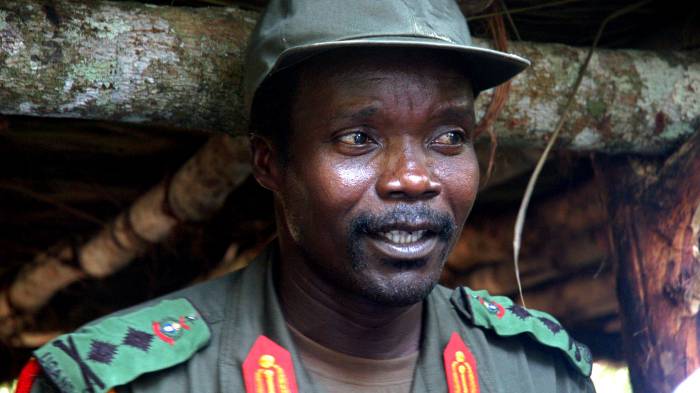 Ahh, the good old former LA Clippers owner. His girlfriend had recorded Donald Sterling going on a racist rant where he told her that he didn’t want her to bring black people to the games or post any pictures with black people on Instagram. Sterling ended up receiving a lifetime ban from the NBA and fined $2.5 million. 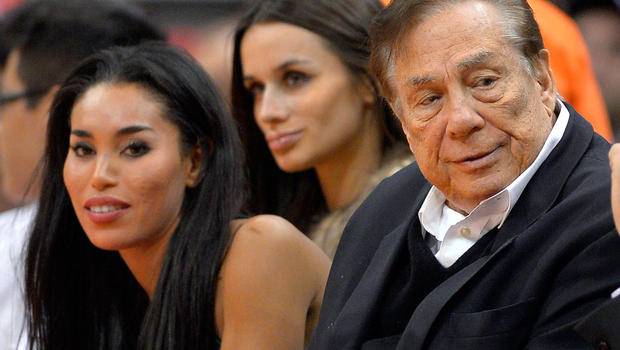 Nate Parker’s film “Birth of a Nation” got more attention than it bargained for after stealing the spotlight at the 2016 Sundance Film Festival. The great anticipation surrounding the film was thwarted when Parker’s 1999 rape case resurfaced. Even though the director was never convicted, the scandal was all anyone could talk about for months, ultimately affecting the film’s box office success. 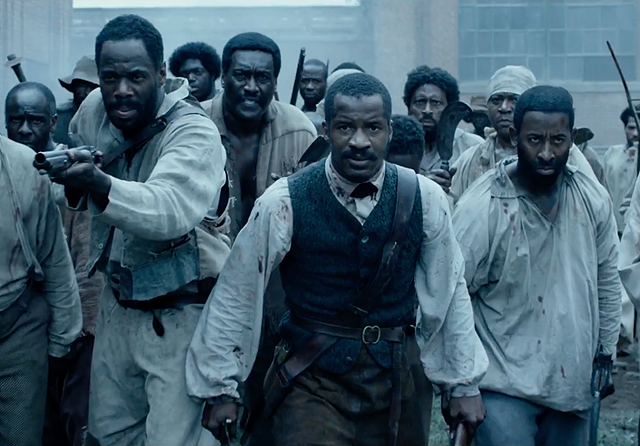 Unless you’re Donald Trump, you’ve probably already forgotten about Hillary’s emails. In 2015, it was revealed that Clinton used a private email server for official communications while she was the Secretary of State instead of her official email server which is on federal servers.

Several of the emails she sent on her private server contained classified and sensitive information. Her emails pretty much took over her 2016 presidential campaign. 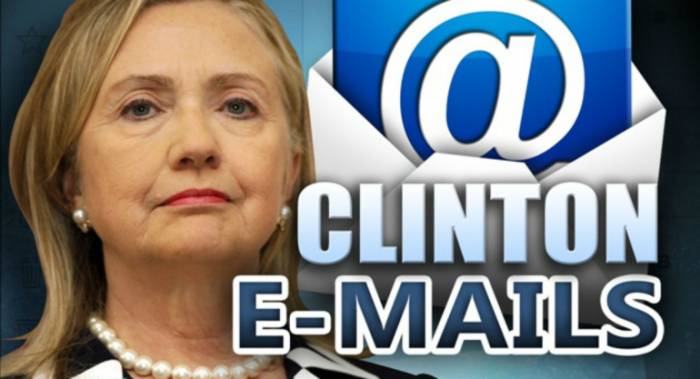 The President’s for-profit-college (if you can even really call it a college) was in legal trouble after it was sued for defrauding customers. Trump University was advertised as a way for students to learn Trump’s business practices for investing in the real estate market, but none of the teachers were personally picked by the business mogul and some had actually gone bankrupt before.

It was reported that the university and its instructors were trained to just sell “expensive generic seminars.” Trump ended up paying a $25 million settlement.

It was one of the most memorable moments of President Barack Obama’s reign: On May 1, 2011, President Obama arranged a mission to take down public enemy number 1, Osama bin Laden, in a dangerous raid. In the picture, Obama, along with Vice President Joe Biden and members of the national-security team, are receiving an update on the mission itself. They were watching the scene unfold on the screens in front of them while listening to the firefight going down over audio. As we all know now, the mission was successful and bin Laden was killed during the raid. The picture of what was going on in the situation room quickly went viral as people stared endlessly at Obama’s intense face and took note to the expression Secretary of State Hillary Clinton was wearing and the position of her hand. 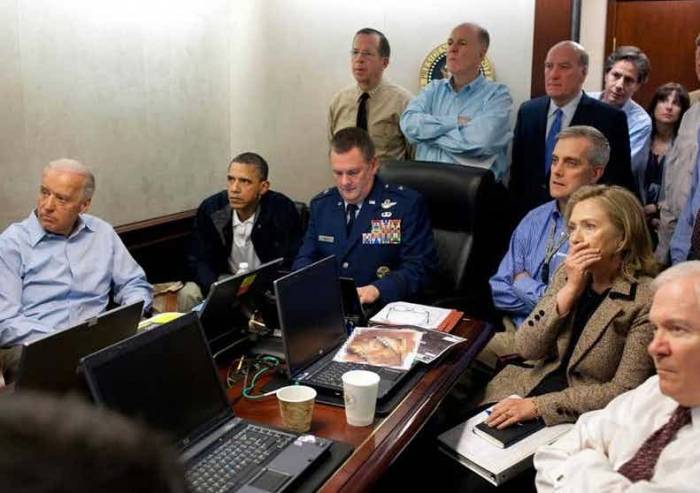 Back in 2012 when she was a part of the Olympic championship gymnastics team dubbed “The Fierce Five,” gymnast McKayla Maroney took home the silver medal for the vault finals. A photograph was shot of her clearly not looking all too impressed with her silver medal, and the pic quickly went viral. Tumblr even started a blog called “McKayla is not impressed”. The image was photoshopped millions of times that included McKayla not being impressed with other famous places or situations.

Back in 2012, a photo of a stingray photobombing three girls spread like wildfire across the internet. The terrified looking girls were standing in the crystal clear water while the Stingray appears to be hugging the girls in the photo as onlookers laughed. 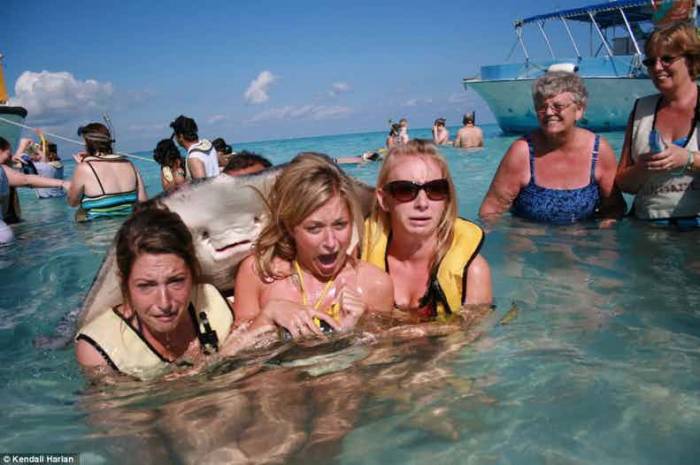 To this day, no one knows who the girl in the picture is or who shot the photo that went viral back in 2009. The expression that the camera caught was an instant classic since she looked like she was running for her life FROM the bubbles themselves. After the photo was uploaded, people started photoshopping her running away from dangerous situations. Buzzfeed even did a photoshop challenge inviting their readers to photoshop the bubble girl themselves. The end results were freaking hilarious (especially the one of her running from the T-Rex in Jurassic Park). It was one of the most searched memes back in 2009. 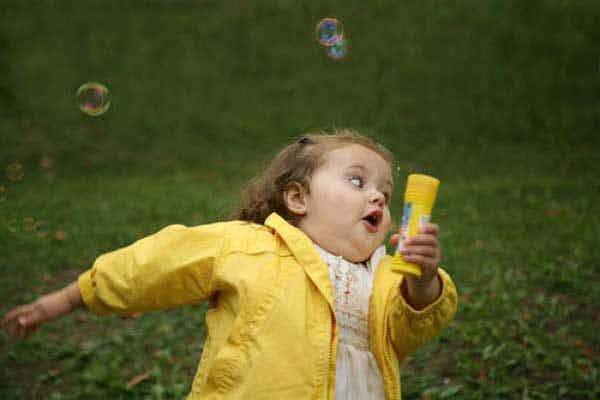