Posted by Sama in Bizarre On 2nd June 2022
advertisement

Imagine an unknown man invading the privacy of your business and refusing to leave your place, in fact threatening you if you tell them that you will call cops on them, and additionally tells you that your race destroyed his life. It is very natural that any person involved in this situation will feel scared given the rise in racist attacks in the US over the past few months. 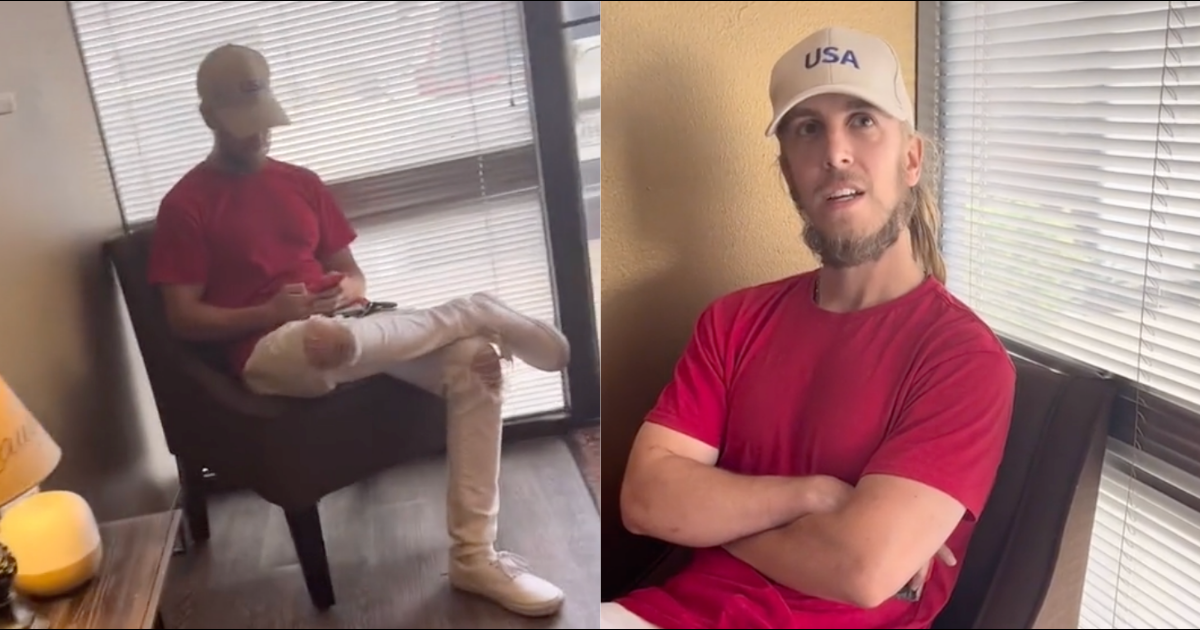 A black spa owner in Texas recently took to social media to share a disturbing experience where she was confronted by a White man who claimed she "destroyed [his] life".

The spa owner recorded the encounter in a series of videos which she later posted on her TikTok account. Though for her safety and to protect her small business, she chose to stay anonymous. 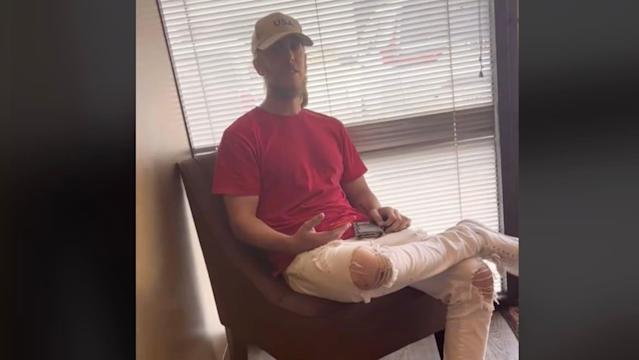 The spa owner captured the man in question seated on a chair, wearing a "USA" baseball cap

In her first video, the spa owner captioned that she began recording the disturbing interaction after the man started exhibiting unusual behavior as soon as he set foot in her spa.

"Racist person not wanting to leave my business after asking him to leave after I found him casing my place while I was with another client."

"I asked him to please have a seat and I would be with him shortly but he decided to do what he wanted to do."

"He started making fun and talking sh*t about race, class, religion, etc and then impersonated a police officer." 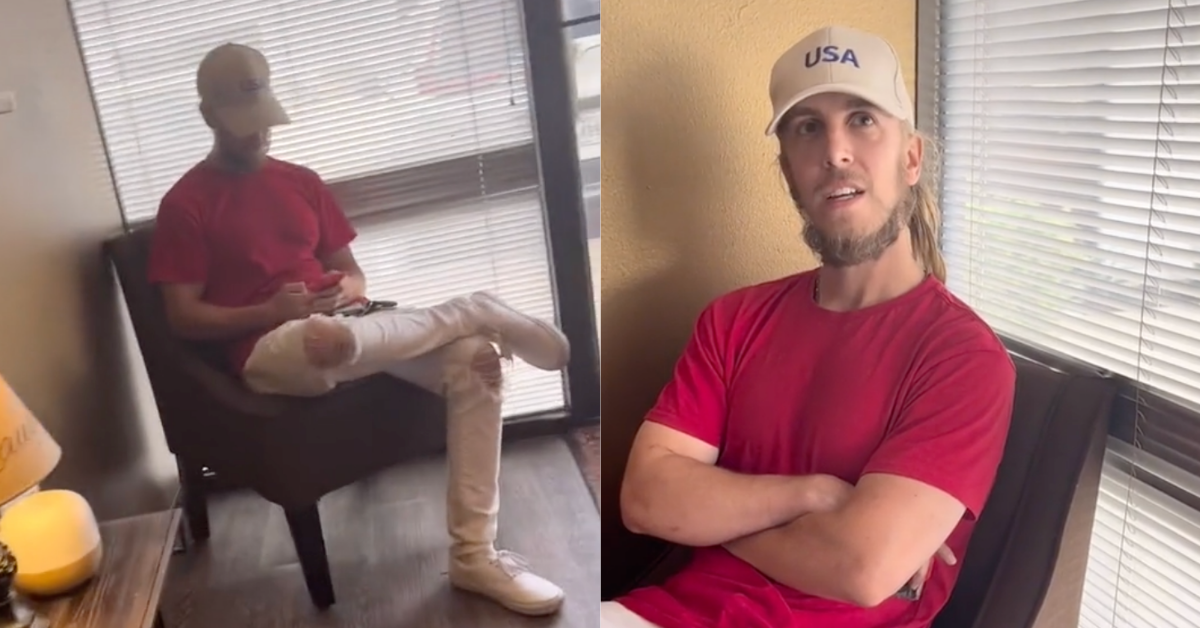 The woman continued to request the man to leave the premises but he turned a deaf ear, even threatening to call the cops, which the owner encouraged him to do.

The white man then accused the spa owner of "lying" to him, she reminded him of when she asked him to take a seat in her lobby, he instead walked around the establishment, appearing to "case the place", which she told him she found very unsettling and disrespectful of her other clients.

@morgan.moon.goddess PART 1. Racist person not wanting to leave my business after asking him to leave after I found him casing my place while I was with another client. I asked him to please have a seat and I would be with him shortly but he decided to do what he wanted to do. He started making fun and talking 💩 about race, class, religion, etc and then impersonated a police officer. Btw, the police never showed up. I waited 45 minutes and nada! 🙂 #Dallas #FYP #racist ♬ original sound - user9600186100923

The man's refusal to leave carried on into a second video

The spa owner even informed the man that she is recording him and told him that she will post it online, the man remained unaffected and kept on looking at his phone.

The spa owner's voice could be heard getting increasingly frustrated at the man's refusal to leave, eventually leading her to say "get the f*ck out."

Finally, the spa owner threatened to call the cops on him for not leaving her place, the man responded by saying he "liked the police", going on to say they were "nice to [him]", and he had previously worked with the "Syrian Police Force."

The spa owner went on to tell the man he was "ruining the vibe", leading him to respond there was "no vibe".

When she reminded him he had previously made jokes about Jehovah's Witnesses and others, the man laughed and said he would wait for the police.

@morgan.moon.goddess Racist dude talking about race and class and not wanting to leave my establishment after telling him numerous times to go. The police never showed up. #dallas #texas #racist #fyp #trending ♬ original sound - user9600186100923

The man claimed she was "jipping [him] of all his time and energy", leading the spa owner to yell he was "wasting [his] own time by remaining in his chair and not leaving."

His voice remaining mellow and emotion free, the man then declared it was only fair he "balance it out" by wasting the spa owner's time since she was wasting his.

The second video ended with the spa owner expressing her eagerness for the police to arrive and "put [the man] in jail".

Viewers were quick to respond with confusion, anger and fright at the man's strange and unsettling behavior

The third video shows the woman informing the man that since she asked the man repeatedly to leave and refunded him for his appointment, he was technically trespassing.

The man then told the spa owner she had "ruined his entire day", leading her to ask if that was the case, why would he want to stay there?

He responded by saying he enjoyed continuing to waste her time, until his accusations against the spa owner suddenly got a lot more serious.

"Your race and your class destroyed my family and my life."

"You ruined my life, my entire legacy of being a Christian."

"Your playing an energy chess game with an individual which has nothing to do with your class."

Baffled by what she was hearing, the spa owner reminded the man he was invading the privacy of her business by walking around the spa without permission.

But the man remained belligerent, with the video ending with his baffling response.

"Maybe you could have asked me if I wanted to be a rapper/gangster in California."

The spa owner later published a fourth video, once again including his racist accusations, but this time reaching out for help in identifying him.

She revealed he made his appointment under a false name, and arrived in a car with paper license plates.

The previously unidentified man was revealed to be a Dallas area locksmith known by the name of Levi David Briggs, and as confirmed in one of the comments, he has harassed other people at local businesses in the same manner.

The spa owner also confirmed in the video's overlay she called the police before she began recording the video, but was less than thrilled with their response.

"Yea, the cops were called way ahead of the recording."

The spa owner went on to tell The Daily Beast her business is only a short distance from a local precinct and believed her race might have factored into their apparent disinterest.

"Because I’m a person of color, the system isn’t for me.”