Posted by Sama in Bizarre On 31st July 2021
advertisement

This White woman who has won first prize at the Blerdcon cosplay competition is getting heat from the internet for participating in a competition that is considered a safe place for people of color and even winning a prize for it. She took to Twitter to apologize for her actions and also announced that she is in the process of returning the prizes. 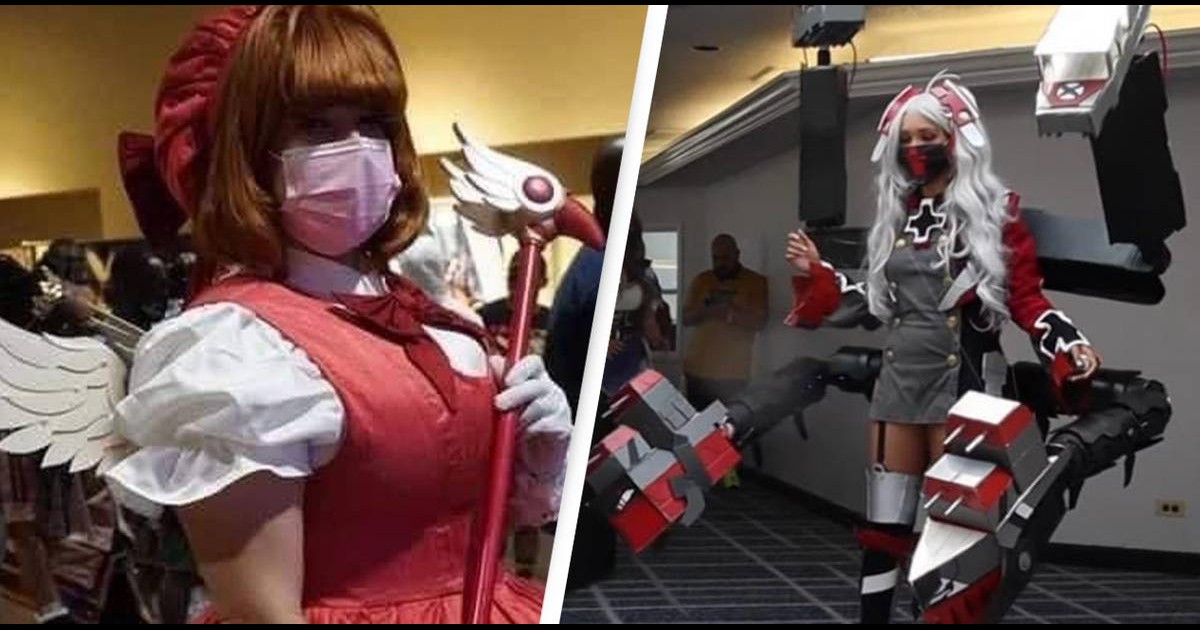 This cosplay contest at Blerdcon in Arlington, Virginia has become controversial after awarding a winning prize to a white woman dressed as a black.

The word Blerdcon is a portmanteau of "Black" and "nerds." The contest is for the purpose of promoting people of color and is a place that encourages diversity. The competition takes place in July for three days at the Hyatt Regency Crystal City at Reagan National Airport. 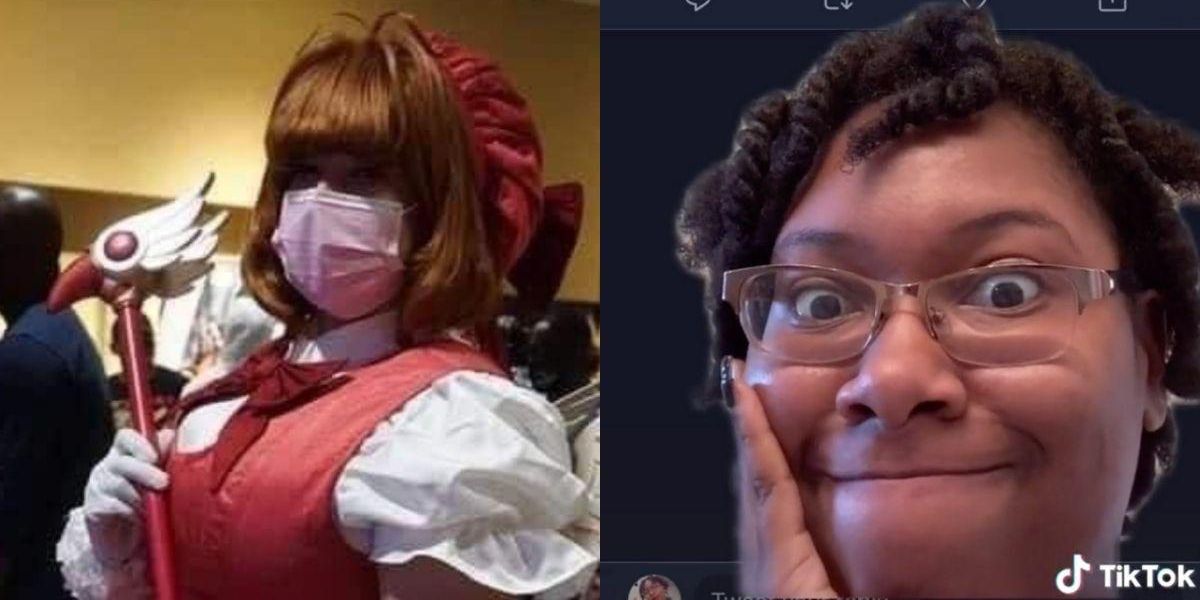 People attending the event and black people on social media became outraged at the management of the show for awarding the first prize to a White woman. 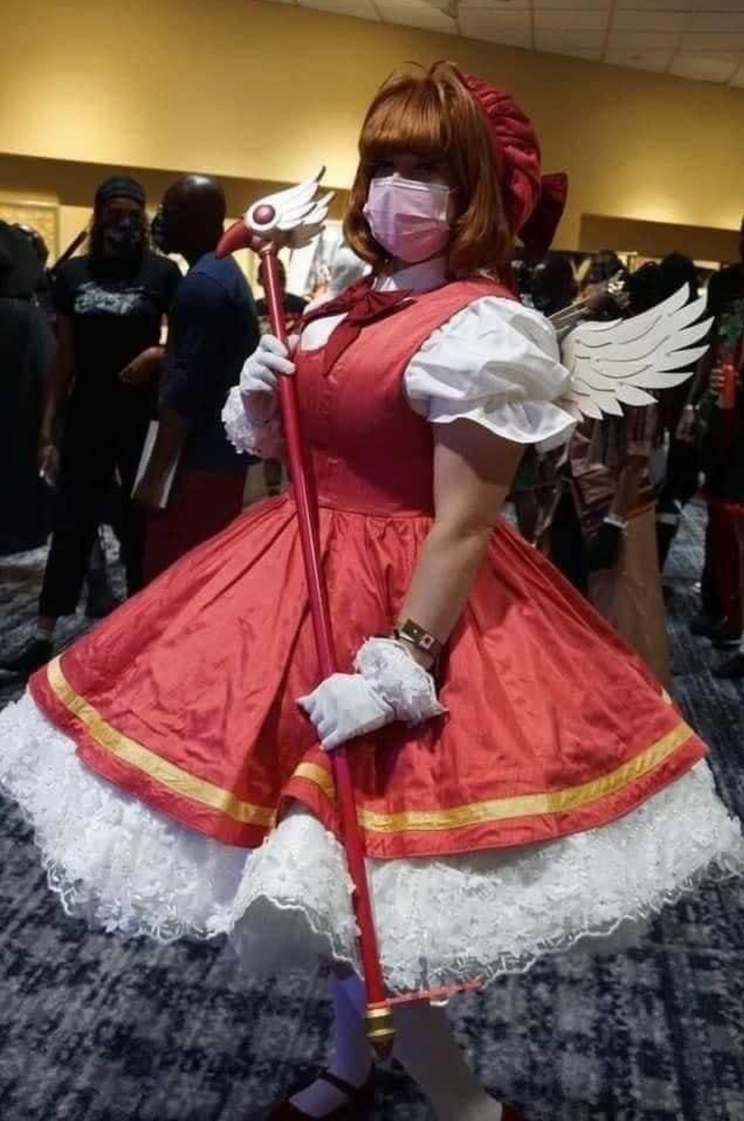 The woman who won the prize was dressed as the character Sakura from Cardcaptor Sakura. She also took to social media to apologize for her ignorance. 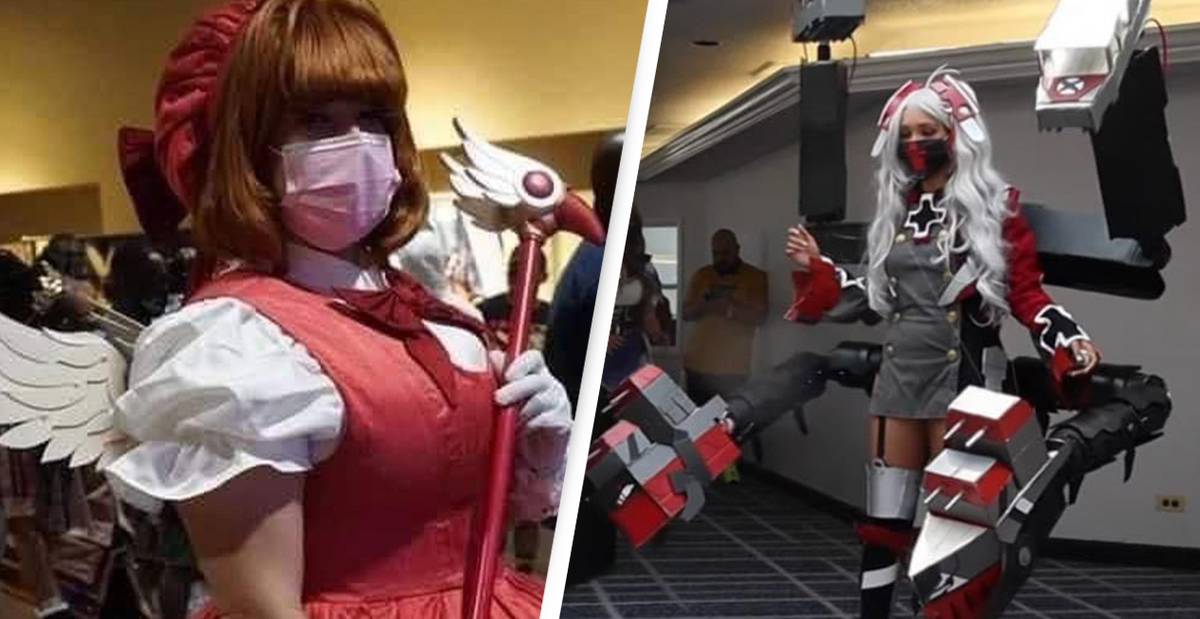 This is a Yt woman who attended BLERDCON and decided to compete against some great black cosplayers…. they all had way better Cosplays 🙄— Tani J 👑 (@Tani J 👑) 1626755985.0

wtf is the point of #Blerdcon if y’all let yt people win pic.twitter.com/IX5UwRkq0o

The Blerdcon website states the event "highlights and celebrates Blerd culture and creates a marketplace of ideas where sharing that culture can take place with proper context, attribution, and positivity in an inclusive environment."

*hearing about BlerdCon for the first time*
ME: OMG! WTF! I GOTTA GOOOO. Finally a con for black people and a safe space.

*hears a yt woman won the cosplay contest
Me: pic.twitter.com/zE1cJom6iq

The woman who caused all this controversy recently took to social media to address the drama.

"I need to address the Blerdcon situation," she tweeted on Tuesday.

I need to address the Blerdcon situation. First I want to apologize for not doing so sooner and appearing to avoid the situation. I was/am dealing with a family emergency and I was also waiting to hear back from Blerdcon themselves about their own statement.

"First I want to apologize for not doing so sooner and appearing to avoid the situation. I was/am dealing with a family emergency and I was also waiting to hear back from Blerdcon themselves about their own statement."

"I am actively in the process of returning the prizes and have stepped down. I am sorry for centering myself in a space that was not mine to do so."

"There have been plenty of people who have said I should have read the room and not entered despite my friends encouraging me to do so."

I am actively in the process of returning the prizes and have stepped down.
I am sorry for centering myself in a space that was not mine to do so. There have been plenty of people who have said I should have read the room and not entered despite my friends encouraging me to do so

And they are 100% right. I am a grown adult and should have thought about how my participation could take away from another cosplayer who is black who might be over looked in other spaces.

I will be honest my intention was never to enter and win anything. Believe me seeing the other cosplays during prejudging I did not genuinely think I stood a chance against any of them. All I had hoped to gain by entering was notes on how to improve my own construction techniques

And yes, I recognize I should have stepped down sooner and more importantly not entered at all.

However, TikTok user @capnkenknuckles argued that the lady should have not participated in this contest in the first place.

She made a point that part of the impetus for Blerdcon and similar conventions is the racism and anti-Blackness prevalent at other conventions.

She stated that people of color already have very limited opportunities provided to express themselves.

The TikTok user also showed a screengrab of a deleted Twitter thread in which @PhreshxBear said it was their fault for encouraging the lady to participate in the competition.

"I understand the upset this has caused," wrote @PhreshxBears, adding, "but I would rather have that upset directed at me rather than at her." 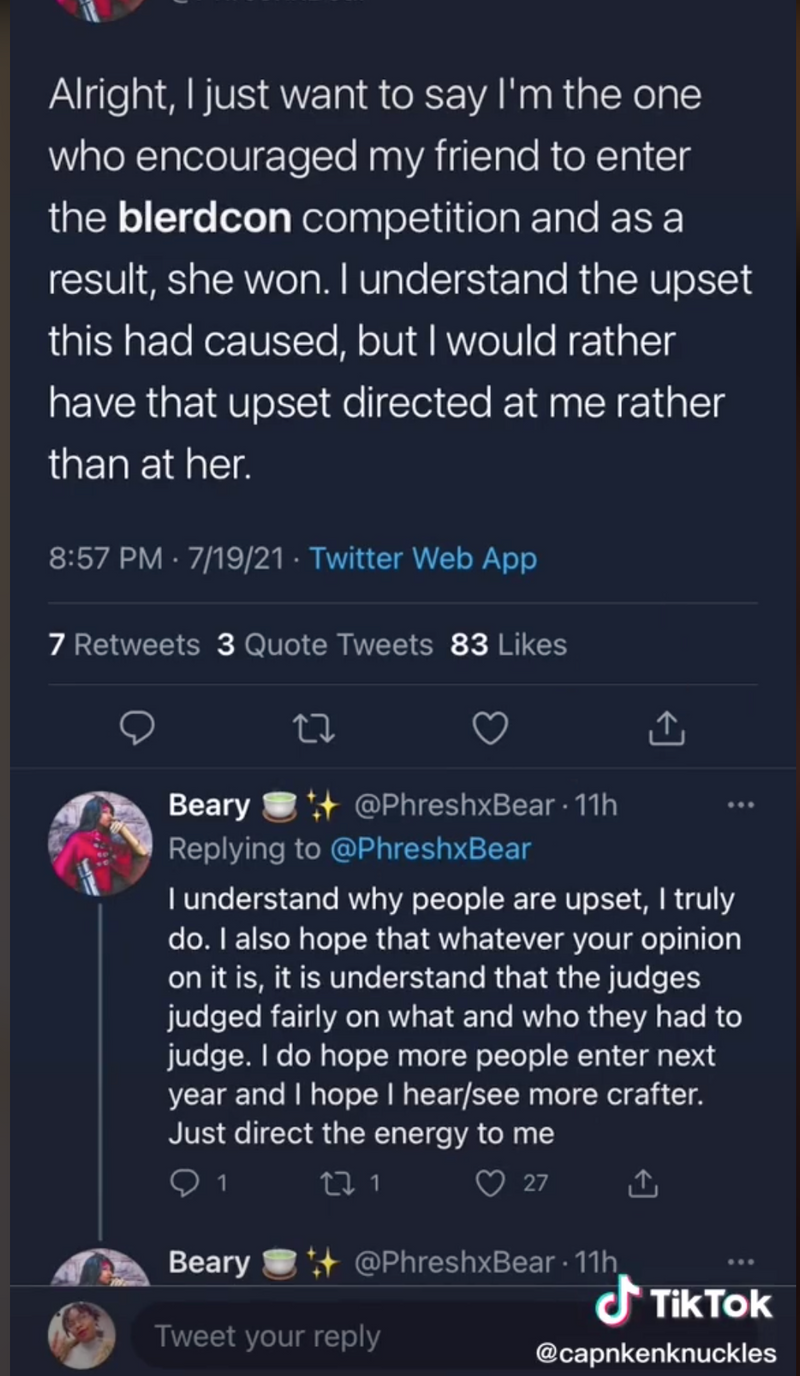 Internet became angrier after one Twitter user @BendingBackward  pointed that the costume which won first place was purchased in the first place.

"actually a purchased costume after all and NOT hand-dyed, handmade, hand-sewn, nothing." 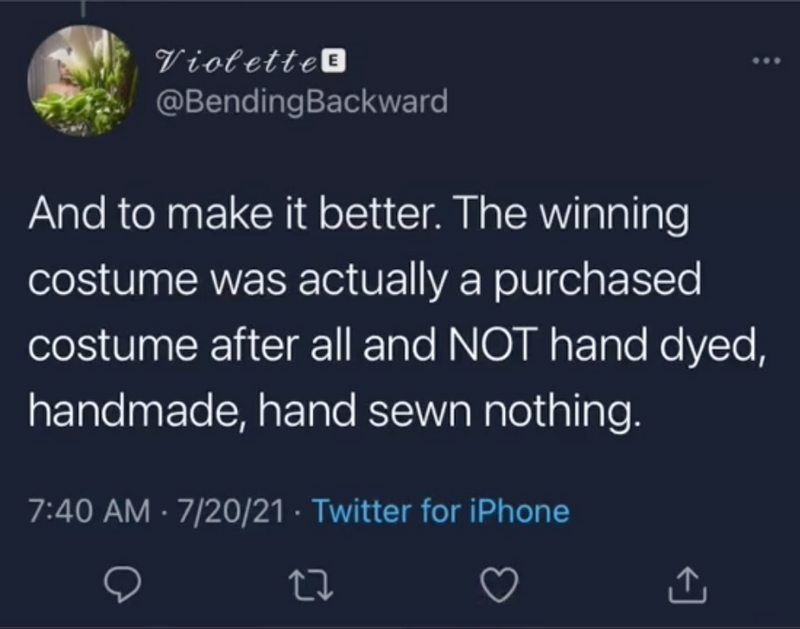 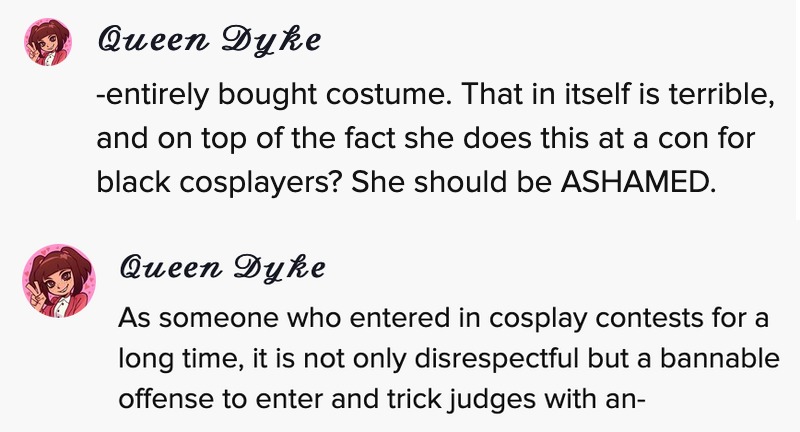 "We are an open space, we are not members of a private organization… we don't turn people away."

"There will always be people there who are not Black, who are not people of color, in participation."

He added that the contestants and the judges won't take bullying from the public and that they would ban people in the future.

So I’ve been wanting to address the whole #blerDCon2021 costume contest situation. As one of the judges I feel like it’s important to say something Because a lot of the shared posts I’ve been seeing go around were from people who weren’t even there. Also it’s a cosplay contest.

Moving forward, the judge also told public that the convention could "include specific categories within the costume contest more than just a top 3" as well as "potentially including an audience vote/fan favorite portion."

TikTok user @capnkenknuckles clarified in her video, "I'm not against White people being at Blerdcon."

"Even as an ally, this doesn't seem like a good idea."

Here it should be pointed out that this is the second time a non-Black Blerdcon convention participant won the cosplay contest.

First and foremost I love blerdcon because of its inclusivity. It’s called “blerdcon” but that doesn’t mean other people of other ethnicities and backgrounds can’t participate. Regardless. All the contestants did the best they could and we appreciate all entries.