Posted by in Social Issues On 2nd October 2021
ADVERTISEMENT

Woman asks internet for advice on what to do after finding out that husband’s deceased co-worker was actually his mistress. 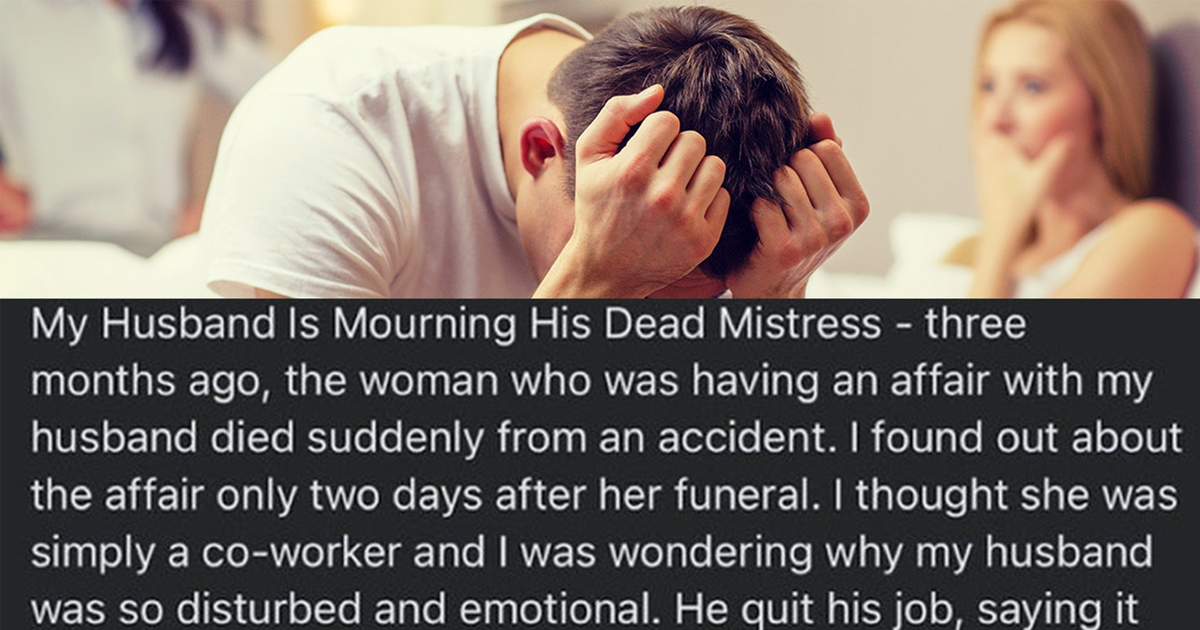 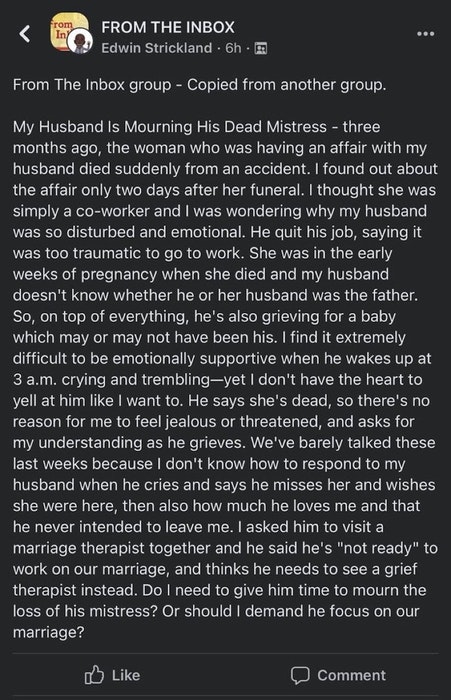 The original screenshot was shared by user @aliyajmari which said,

“Three months ago, the woman who was having an affair with my husband died suddenly from an accident. I found out about the affair only two days after her funeral. I thought she was simply a co-worker and I was wondering why my husband was so disturbed and emotional. He quit his job saying it was too traumatic to go back to work. She was in the early weeks of pregnancy when she died and my husband doesn’t know whether he or the husband was the father. So, on top of everything he’s also grieving for a baby that may or may not be his.”

She went on to ask how to help him deal with the situation which had everyone rather baffled.

“I find it extremely difficult to be emotionally supportive when he wakes up at 3 am crying and trembling yet I don’t have the heart to yell at him like I want to,”

Thank you @romcomplication for pointing out the original source: https://t.co/i4gqN1elVl

“He says she’s dead so there’s no reason for me to feel jealous or threatened and asks for my understanding as he grieves. We’ve barely talked these last few weeks because I don’t know how to respond to my husband when he cries and says he misses her and wishes she were here., then also how much he loves and that he never intended to leave me.”

I’m sorry, that man is getting left in the middle of his grieving if it’s for me cause not only did I find out you were cheating but she was pregnant too for him potentially ? This is WORSE than Ghost and Angela cause wth ??

The anonymous woman who seems to have the patient of a saint also offered to go to marriage therapy and work on it together.

It’s clear he doesn’t want to work on the marriage. It’s not her responsibility to help him get over the loss of a woman he was seeing behind her back. Once you are this unfaithful, it’s best to consider the marriage dead and just leave.

“I asked him to visit a marriage therapist together and he said he’s ‘not ready’ to work on our marriage, and thinks he needs to see a grief therapist instead. Do I need to give him time to mourn the loss of his mistress? Or should I demand he focus on our marriage?”

Ask him can he multi-task? Pack and mourn? pic.twitter.com/G6g1pptXMT

People couldn't understand how the woman was not considering divorce.

be supportive!!! hit him with your car so he can be with her ❤️

Most were convinced that the ship had sailed on the relationship.

if he left his job expecting her to support him, that is the end.
if they have the money to afford his unemployment, it had better be contributed mostly by him, or that is the end.
that would be his calculation, in reverse.
not enough focus on the money, where everything hinges

The OP then posted the response that the professional gave to the woman. Their response was much the same but asked a very important question. Did the husband of the mistress ever find out about the affair?