Posted by Sama in Fails On 31st May 2021
advertisement

TikTok user Jules Schreiner was left shocked and gutted after finding that the sofa she sold on Facebook Marketplace for mere $500 dollars and felt like she got the good side of the bargain was in fact worth 40 times what she sold it for. However, few people claim that Schreiner is exaggerating the price and the furniture piece does not even look that great in condition to be sold for thousands of dollars. Watch the video clip and let us know what you think about Schreiner's claim. 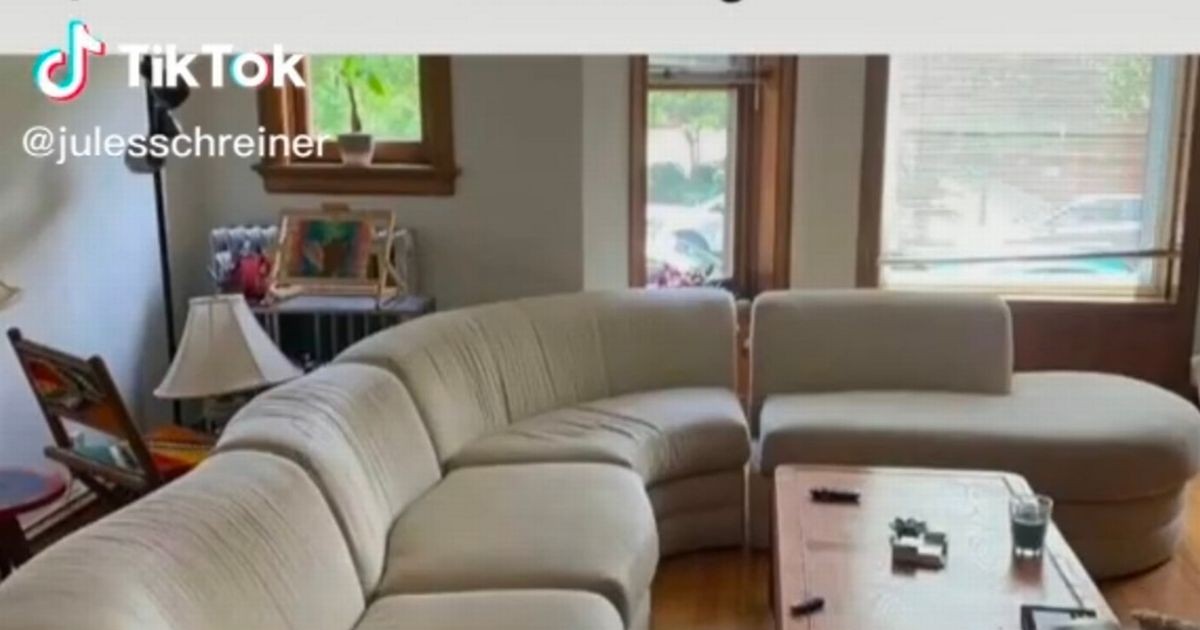 There are always some lessons in life that are learned the hard way.  An example to quote here is of this woman who learned the original value of her sofa after selling them on sale for $500.

TikTok user Jules Schreiner took to social media to share that while selling her sofa for $500 she thought she was getting a great price for it.

She shares that as soon as she uploaded the item for sale on Facebook Marketplace she had a buyer and she couldn't be happier to get rid of the unwanted furniture piece.

But alas, decisions made in haste never bear good results. 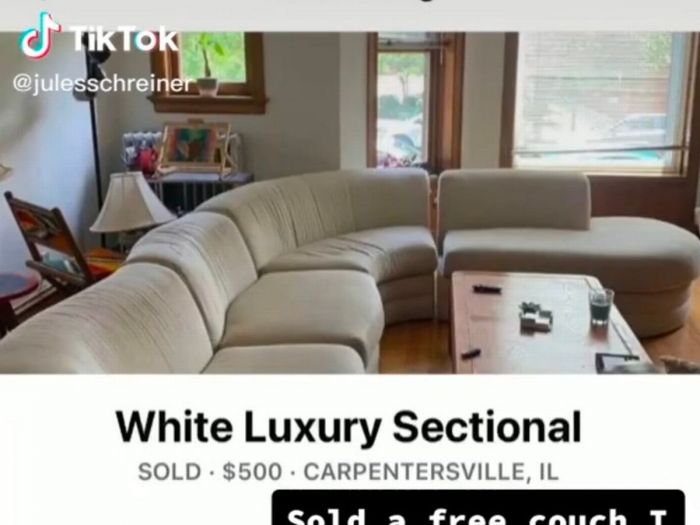 As soon as she sold the item, she came to know that the actual price of the couch was actually 40 times what she sold it for.

In a now-viral clip, Schreiner explained that she put the piece of furniture up for sale after someone gave it to her for free. 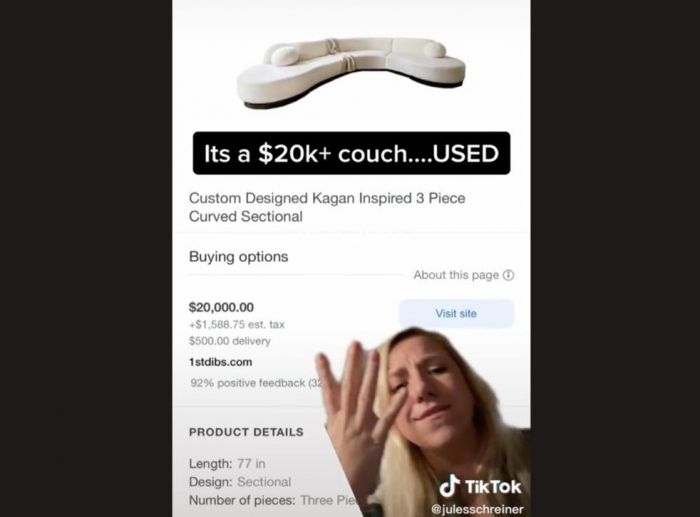 Now imagine going through this pain of knowing you sold something so worthy practically for free.

As Schreiner shares, a man bought it and picked it up "within seconds." Looks like the man knew that he had to grab the right opportunity.

However, after selling the sofa so cheap she saw that the man had shared the brand on his Instagram account, curious, Schreiner decided to look up.

And much to her horror, she found that the sofa was actually created by Vladimir Kagan, an icon of mid-century modern American furniture and interior design. 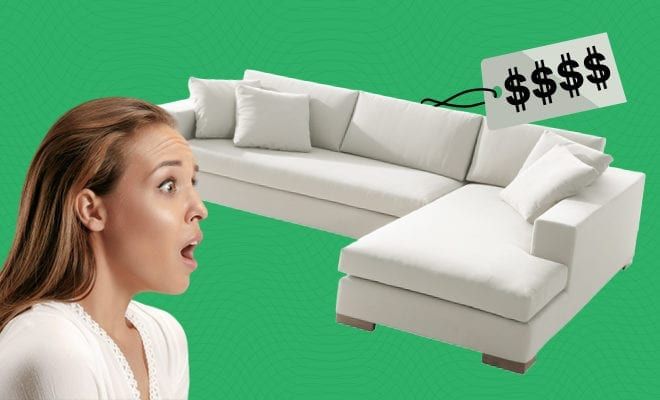 In the video clip shared on her TikTok account, she shared screenshots of other – smaller – pieces from the designer brand, all of which were selling for more than $14,000 dollars. 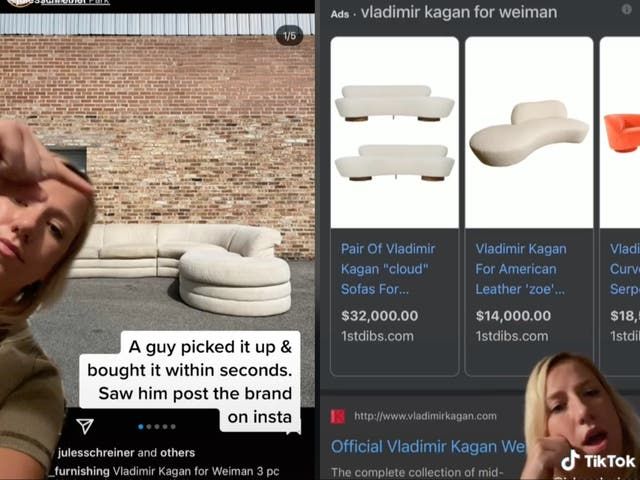 Schreiner in the video clip also shared the one sofa that looked similar to hers and is being sold for a whopping $20,000 dollars – used.

In a caption to her video, Schreiner wrote: "Thought I had got a great deal on FB market place but ya know things are always too good to be true." 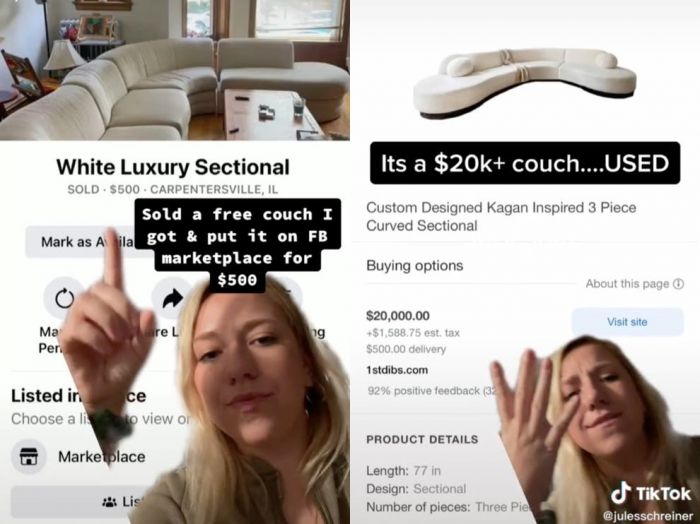 Her video clip has not only gone viral on various social media platforms but people are also sharing their sympathies with Schreiner for bearing such a big loss so calmly.

Another thought of the sofa’s original owner, saying: “Imagine the person who gave [$20,000] away for free though!”

There are also few people who questioned Schreiner’s claim of this much worth of sofa.

“It’s not even the same couch,” one wrote, referring to the $20,000 dollar example she had displayed.

Another said her source – 1stDibs – was “not trustable” for checking the accurate value of vintage furniture.

A third pointed out: “It’s only worth that much if someone is willing to pay. I think you made out just fine getting $500 for [that] kind of discoloured used couch.”

Few people suggested her to look at the bright side of the picture: “In fairness you all won from this,” they commented.

“The person got their couch for free, you made $500, and the last guy got a bargain."