Posted by Abdul Rafay in Relationships On 16th February 2021
ADVERTISEMENT

Jenny, 31, maintained a Google Sheets spreadsheet with descriptions of any person she dated before meeting her current boyfriend. A San Francisco-based internet tech company employee hoped to use the data to find any insights, trends, and patterns from my dating app behaviour. Jenny included the heights and professions of men, the app on which they met if a relation occurred, and the sort of the first date they went on. She also rated the quality of the first date and sex, if any, as well as the 'reason for failure,' or why she stopped seeing them. 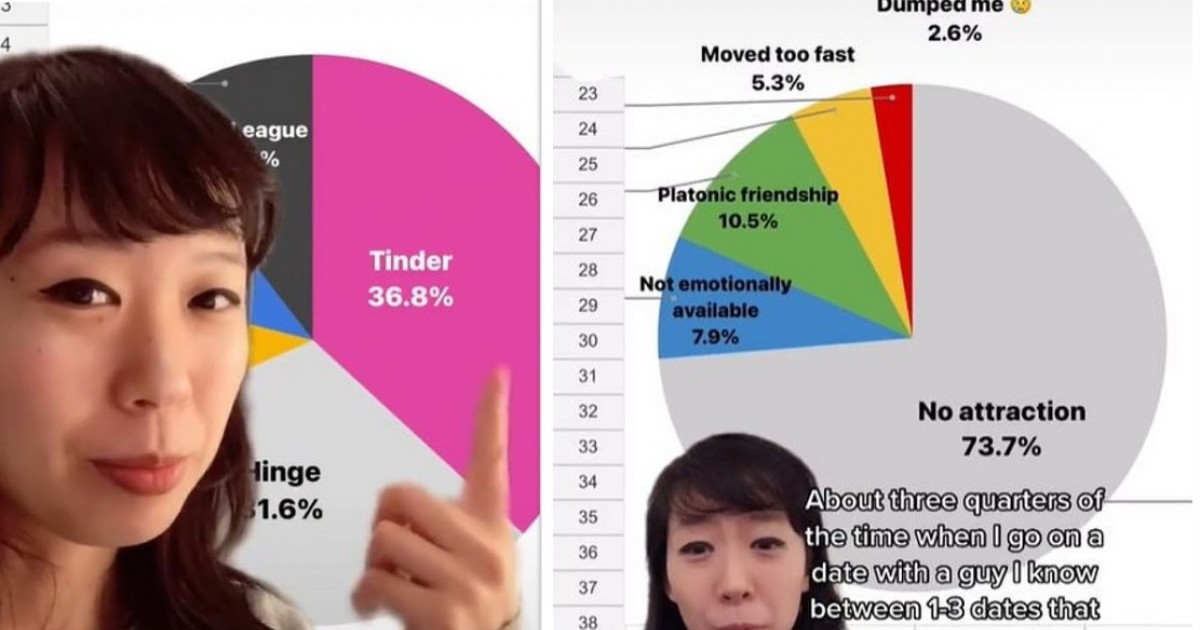 The comprehensive spreadsheet she once maintained to record every single entity she went on a date with was revealed by a San Francisco woman. In a Google Sheets spreadsheet, she kept track of every single date she went on from a dating app, including details about the guys, the number of times they went out, whether they had sex, and the quality of the dates. 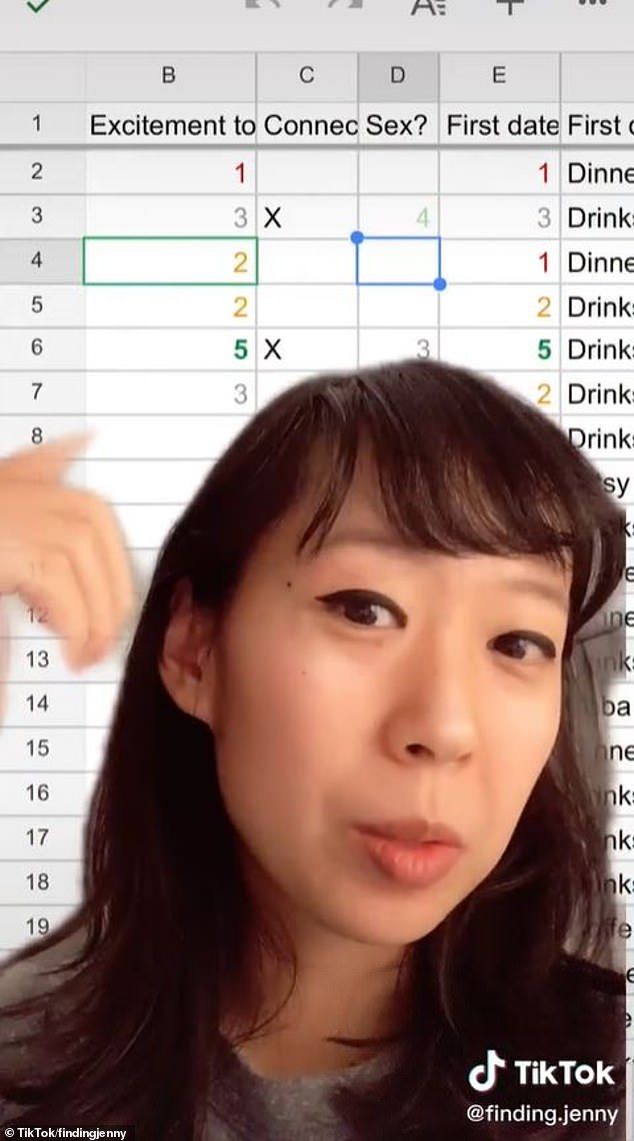 Jenny, 31, has a clear interest in data collection and research and has applied it to her personal life in an unusual way. She also confirmed that she converted the data into graphs and charts, breaking down the apps on which she found success most often, the key reasons why things didn't work out, and how likely first dates are to turn into second dates 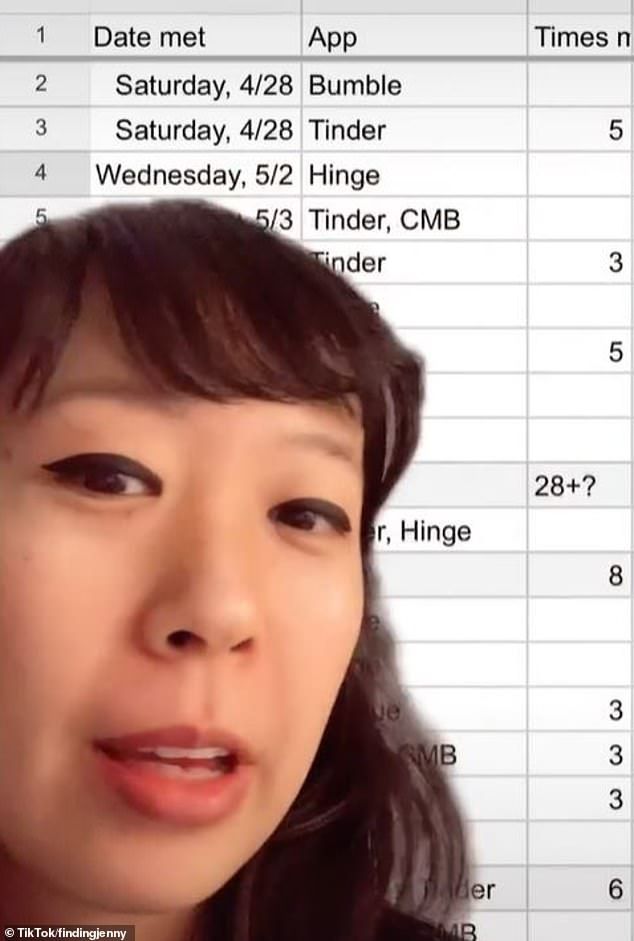 Jenny, who works for an internet tech company and is currently in a relationship, did not share what her boyfriend thinks of her old system, but TikTok users were interested in her spreadsheet and resulting data.

'A couple of years ago, when I first started dating online, I made this spreadsheet,' she said in the first video she posted back in December, which was viewed more than two million times. 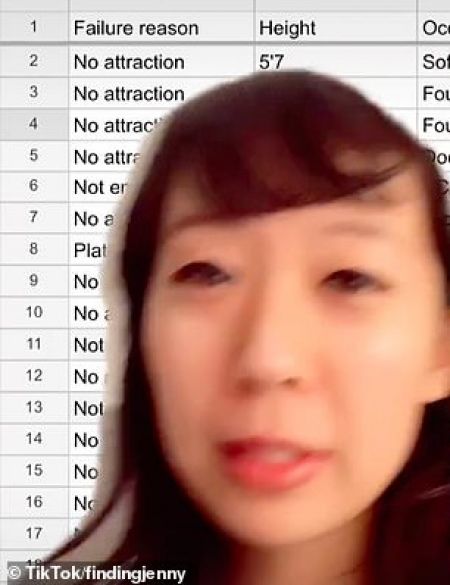 'I was hoping I could use past data to help me find the right one.'

She shared on the screen a quick glimpse of the spreadsheet, showing the different categories she kept track of, such as the approximate height of the man, his occupation, and the app on which they met. 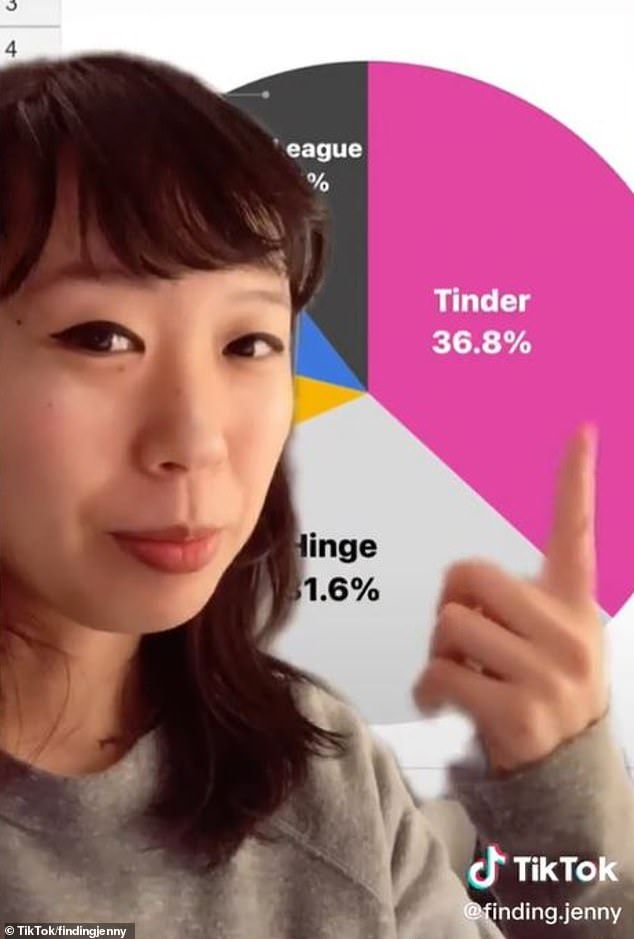 She also included her amount of excitement for meeting the date in person, the day they met, if there was a connection, and the form of the first date they went on (drinks, dinner, artsy). 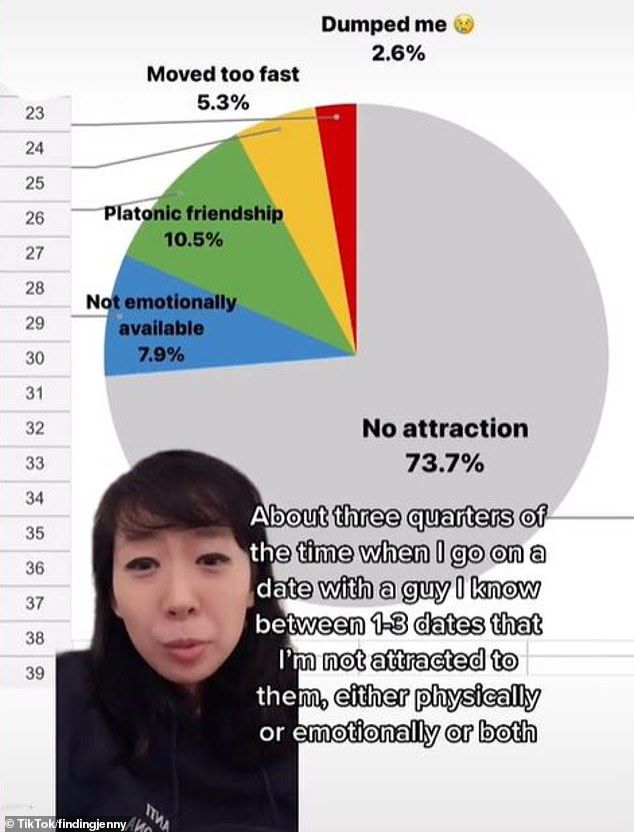 Finally, as well as the 'failure reason,' or why she stopped seeing them, she included the number of times they went out.

Then Jenny turned all the data into graphs and charts because, she stated,' Data is beautiful.' 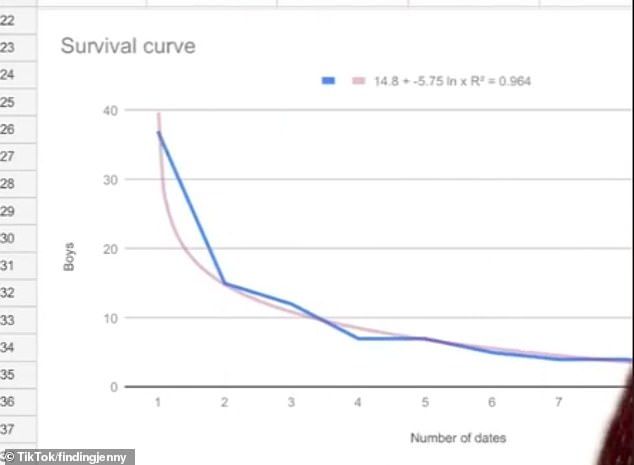 'I did this to see if I could find any insights, trends, and patterns from my dating app behaviour. I want to see if how much I looked forward to meeting someone had any impact on how the date went,' she explained. 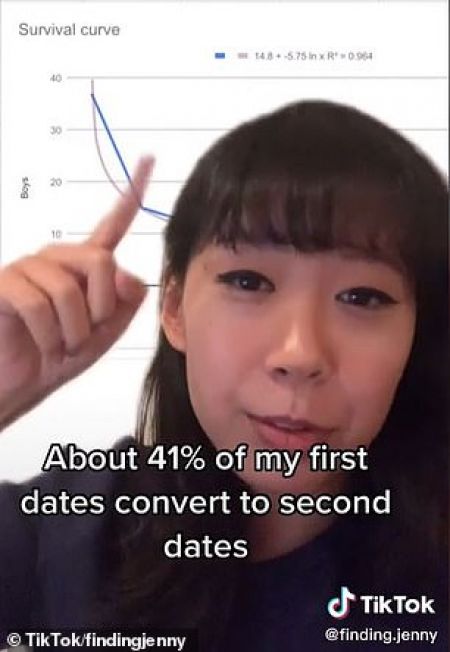 The breakdown of which dating apps resulted in the most dates for her was demonstrated by one pie chart. She discovered that 36.8% of her dates were from Tinder, 31.6% from Hinge, and 10.5% from The League, Bumble, and Coffee Meets Bagel each. 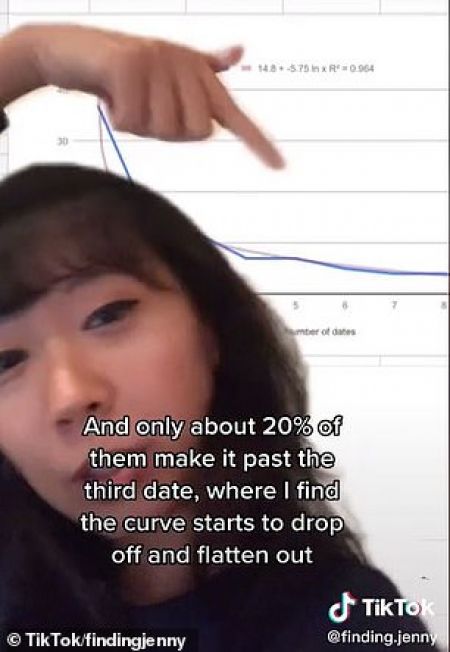 She admitted, however, that she found no correlation between which app she used and whether the resulting date ended up being a good one.

'I also made a survival curve based on how first dates convert to second dates, convert to third dates,' she said. ''And I found for me, if I saw someone four times, I'm likely to see them 10+ times.' 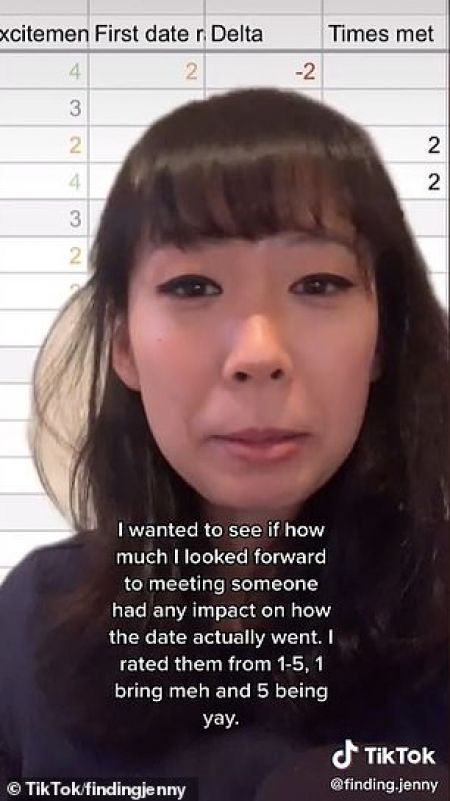 She learned from her data that about 41 percent of her first dates had been transferred to second dates, but just about 20 percent had reached the third date. Overall, one of every ten men she met in her life either became a boyfriend or was otherwise significant. 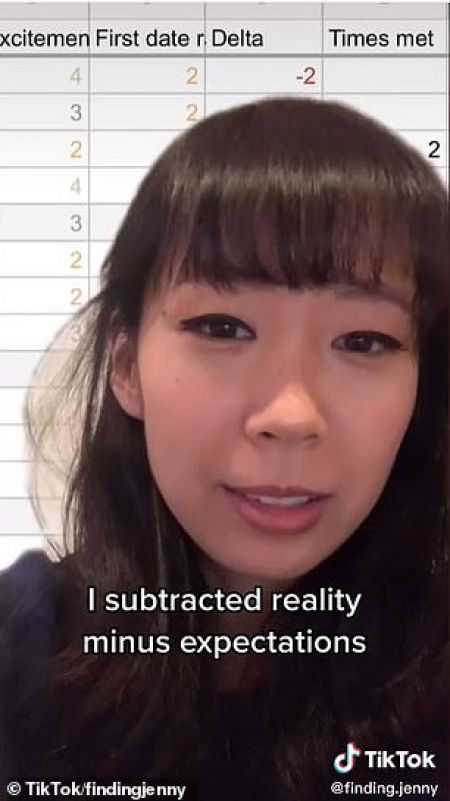 The lesson here, she said, is a reminder that "dating is a game of numbers." She discovered that three-quarters of the time she avoided seeing anyone was because of a lack of attraction, as to why different guys didn't work out. As emotionally unavailable, she reported 7.9 per cent, 10.5 per cent as men who were platonic friends, and smaller percentages as men who went too quickly or dumped her. 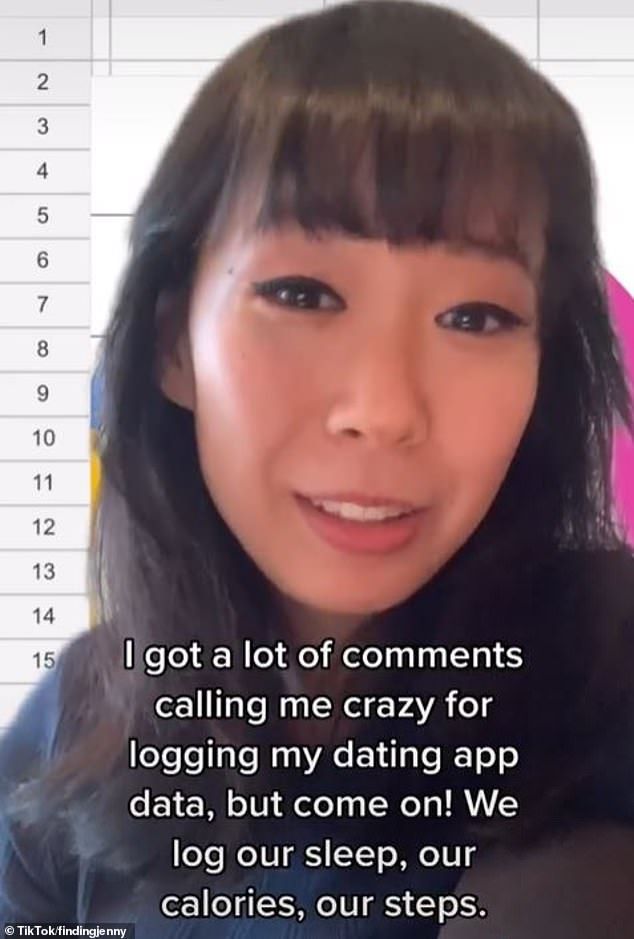 Finally, she created some graphs with less informative detail, such as the men's heights mentioned on her profile. She learned that most of them claimed they were 5'10, but she considered that to be a lie.

The video of Jenny has received quite a bit of coverage, as well as many follow-ups that went into further depth about her graphs. Some people were more mocking, but much of it was optimistic, including impressed people, considered her funny, or were interested in more details. 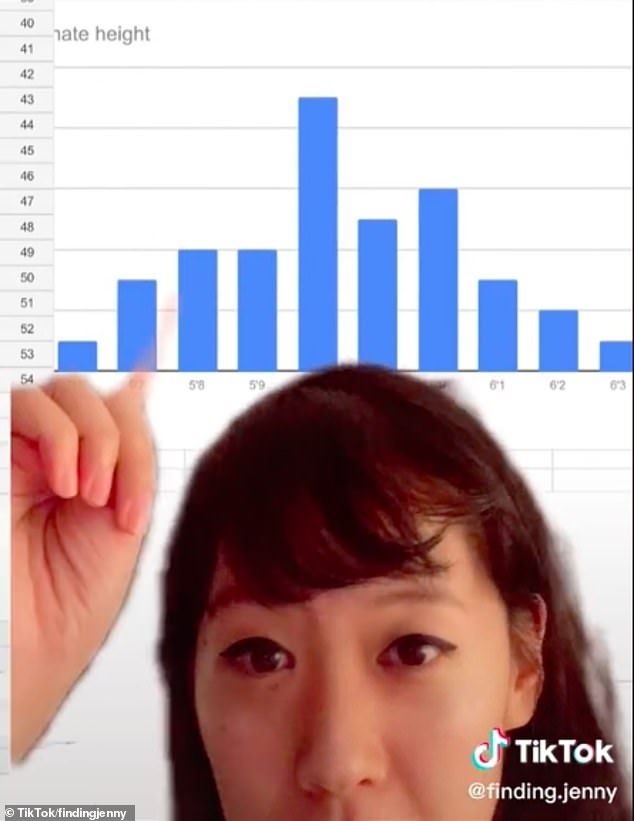 'I got a lot of comments on my last video calling me crazy for logging my dating app data, but come on. We log our sleep, our calories, our steps,' she said.

In some cases, men she was 'looking forward to meeting [didn't] pass the vibe check once I meet them in person.'

'And some people who I'm kind of on the fence about the meeting, not excited going to it, end up surprising me,' she added.

'The spark is a myth and great chemistry can develop with some overtime.' 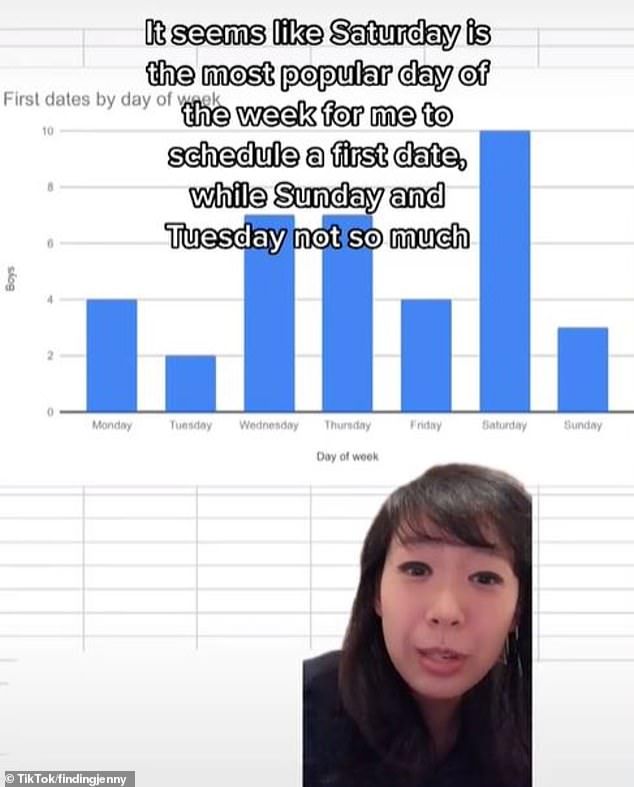