Posted by Zainab Pervez in News On 23rd June 2021
ADVERTISEMENT

The school principal forced the secretary to take naked pictures of her butt, receive sexts from her lover so her husband didn't discover them, and buy her sexy lingerie, lawsuit claims 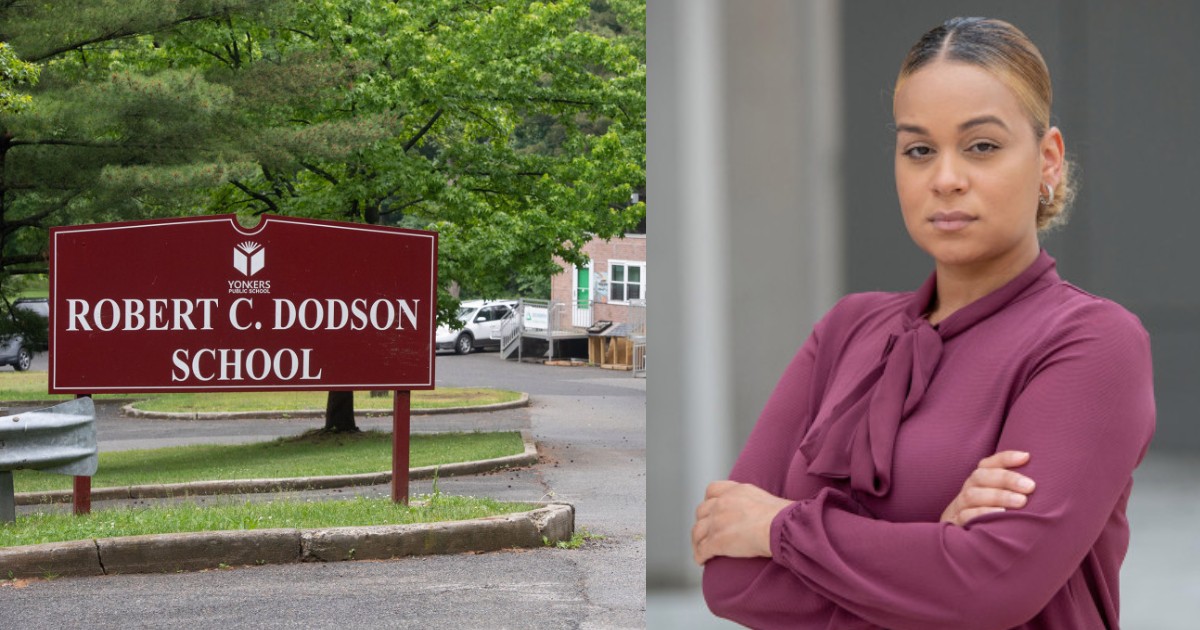 A former secretary at a school in Yonkers is suing the school district, accusing a former principal and other employees of sexual harassment.

In a lawsuit filed in U.S. District Court, Gisselle Vasquez (who was a Spanish-speaking secretary at Dodson School) says Evelina Medina made her save racy photos of Medina's lover to prevent her husband from seeing them.

Medina was the principal of the school. Vasquez also alleges that Medina made her take photos of her in her office wearing only underwear, according to the lawsuit.

In a statement, the Yonkers School District said, "The District cannot comment on matters of litigation. The filing is with the District's legal team." 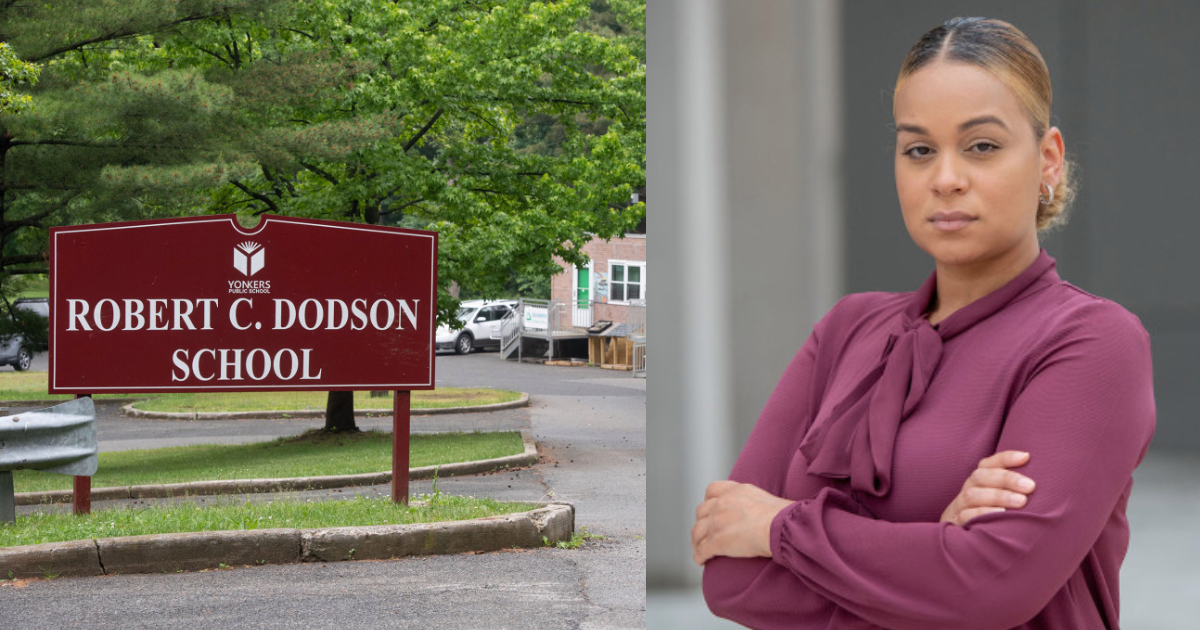 Gisselle Vasquez, a 35-year-old single mom, was hired as a Spanish-speaking secretary for Principal Evelina Medina, 42, at the Robert C. Dodson School, an 865-student magnet school five minutes from Scarsdale. But Medina soon pushed her to do far more than clerical work, the Manhattan federal court papers claim.

On May 24, 2018, Medina texted Vasquez a photo of a man lying in bed in his underwear, and instructed Vasquez to save the photo for her on her own phone, court papers state. 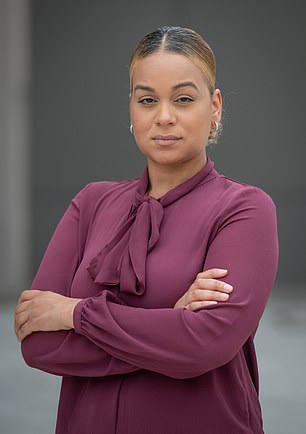 “To this day I don’t understand what would make her so comfortable to ask me to do that for her,” says Vasquez , explaining that the women were not friends. “I wondered if I don’t do this what would be the repercussions for me at work. I’m a single parent and I thought what would happen if I said no.”

The next day, Medina gave Vasquez her phone and asked her to take a photo of her and 'then proceeded to lower her pants to her ankles, turned around and exposed her buttocks in thong underwear and posed,' the lawsuit says.

'She hands me the phone and says, "Close the door,'" says Vasquez

'When I looked back her pants were already down. 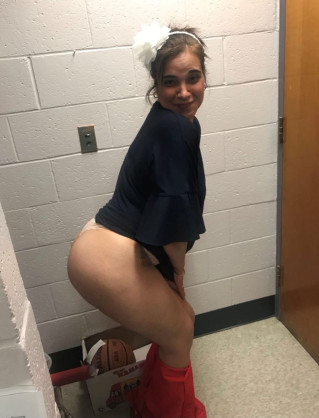 'I was shocked. I didn’t know what to think. I really just froze. I worried that if I just left her office there could be a student or employee or anyone there.

'Her office is in the main office and there is a lot of traffic.'

Medina then texted the nearly bare-butt image to Vasquez’s cell phone and asked her if she could help “edit” them, the complaint says. “She wanted to smooth out the dimples … her cellulite,” says Vasquez

Five days later, on May 29, the principal texted Vasquez another sex shot — this time of a man lying in bed holding his erect penis, the complaint alleges. Medina “instructed” Vasquez to save that photo for her too. 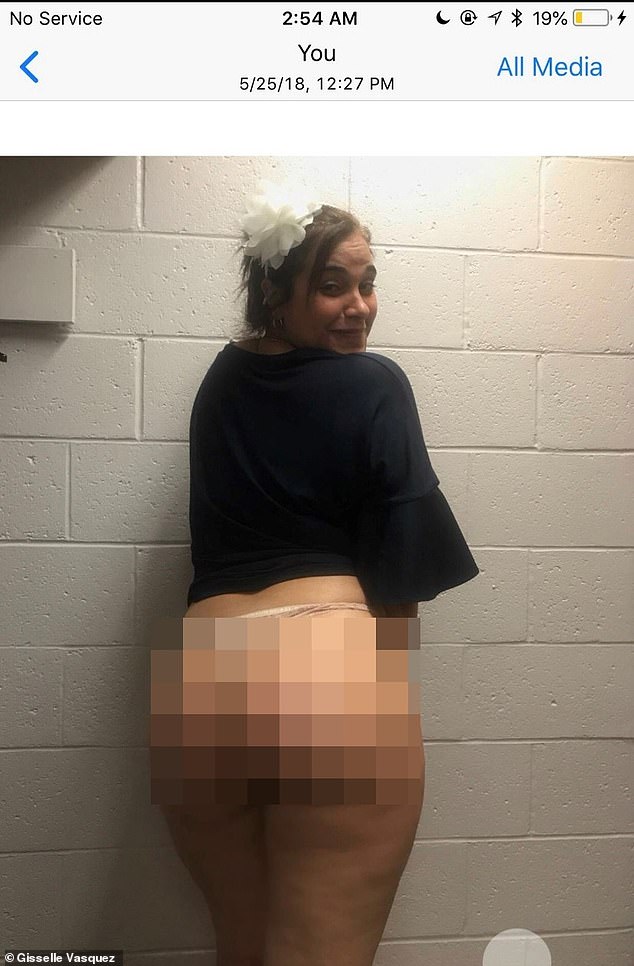 “On more than one occasion, Medina made comments about her lover’s penis size and how it satisfied her more despite being smaller than her husband’s penis size,” the suit says.

“Medina used my client as her own personal drop-box to keep the sexy pictures away from her [Medina’s] husband,” said attorney Christopher Berlingieri. “Due to the serious nature of the sexual harassment here, we felt that there was no other option but to bring a civil action.”

The federal suit charges that Medina on several occasions showed Vasquez her iPhone and told her to read the XXX-rated sexts she and her lover had exchanged. 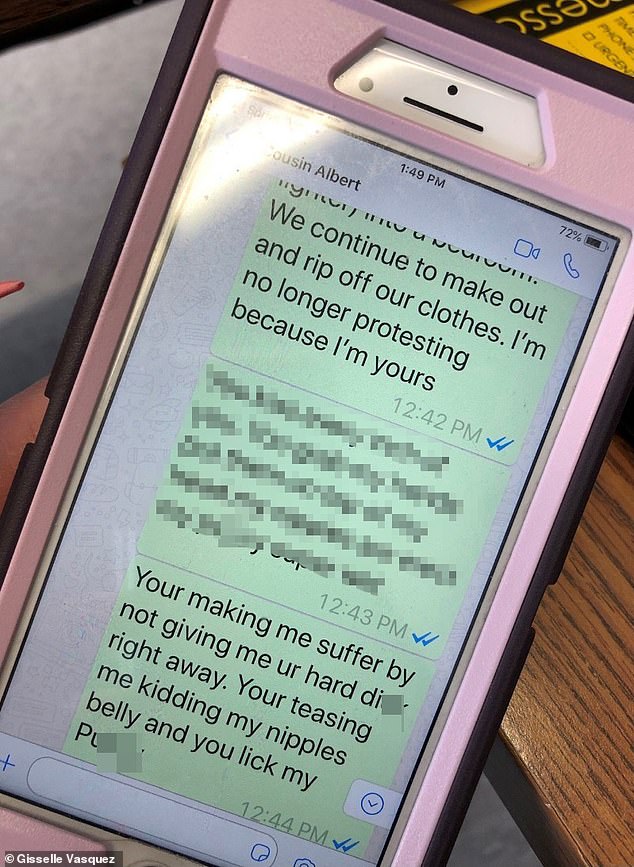 In June, Medina allegedly directed Vasquez to book a hotel room in Yonkers using Vasquez’ credit card for the purposes of a rendezvous with her lover, the suit says.

The principal invited Vasquez and Sandra Guzman, an assistant principal at Dodson, to happy hour after work, and her “lover and his brother” showed up. Medina told Vasquez that she should date her lover’s brother, the suit says.

Vasquez “felt uncomfortable during this encounter and ultimately told Medina that she had to leave,” the complaint says.

Vasquez finally complained to a supervising clerk “about inappropriate things going on. Rather than set up a meeting, [the supervisor] merely responded to just put in a request for transfer,” the complaint says.

On Aug. 9, Vasquez did just that, but “received no response” from HR, the suit says. 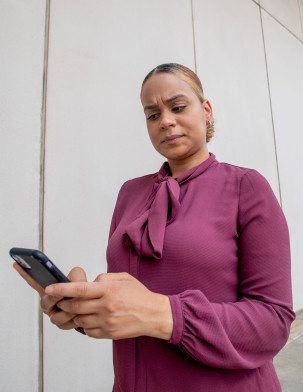 The next month, the sleazy directives continued, with Medina ordering Vasquez to buy her black lingerie during her lunch break “because she had a date later in the city,” the complaint alleges. Medina gave Vasquez $50 and told her to go to the Romantic Depot adult store.

An “intimidated and uncomfortable” Vasquez decided she was not going to make the purchase and instead returned the money to Medina after lunch, telling her she “could not find anything,” the suit says. 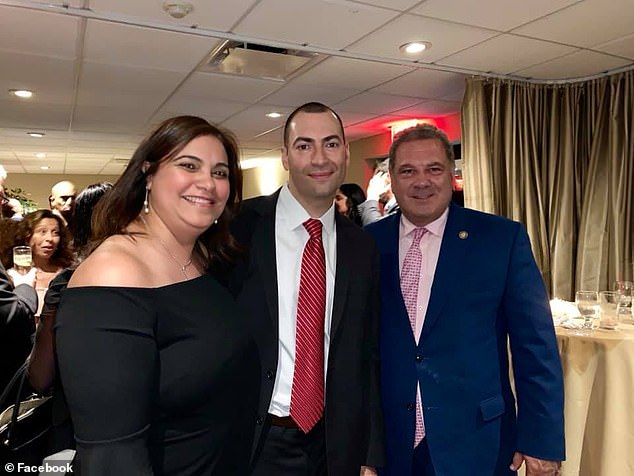 Medina grew increasingly bold in what she shared with her secretary, and would even demonstrate some of her sex moves. The educator “forcefully grabbed [Vasquez] by the neck and throat to show her what she wanted to do with her lover,” the complaint states.

Court papers say that AP Guzman would joke that Vasquez probably didn’t have sex a lot, and Christopher Cassano, another Dodson assistant principal, allegedly asked her, “Have you ever done drugs?” and “How often do you have sex?”

One day while Vasquez was in the main office working the after-school program with Cassano, Medina called the office from her car and allegedly told Vasquez “You should give him some.” Vasquez then asked Medina, “Give him what?” Medina responded, “You know what.” 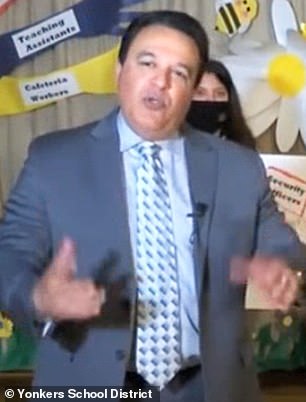 On March 29, 2019, “Cassano leaned in and attempted to kiss [Vasquez] on the lips in the back of the main office while plaintiff was washing a plate,” the suit charges. Vasquez asked Cassano what he was doing and backed away.

“He said, ‘I shouldn’t have done that,’ ” Vasquez told The Post.

On April 10, Vasquez complained to Medina about Cassano and the following day filed a complaint with human resources, the suit says. Vasquez followed up on April 17 with an email to the Superindentent of Schools Edwin Quezada complaining about feeling “extremely uncomfortable at Dodson” and requested a transfer, the suit says.

Vasquez later learned that a teacher at Dodson had a copy of her complaint on her cell phone and was showing it to other employees, the suit says. 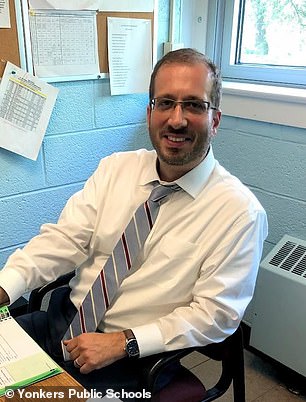 In April 2019, she was transferred to the Cesar E. Chavez School. But it was in retaliation, the suit alleges, and she was given a different position with a different schedule and different job title.

“I think the move was made in case they were sued. They were looking to cover their asses,” she told.

Evelina Medina allegedly made Vasquez take photos of her posing in a thong.

Vasquez’s new hours “were difficult’ because of her childcare obligations and in July 2019 she began to see a psychiatrist “due to the sexual harassment caused by Medina, Cassano and Guzman,” the complaint charges.

In November 2019, Human Resources told Vazquez her complaints were unfounded and HR considered the investigation “completed and closed.” 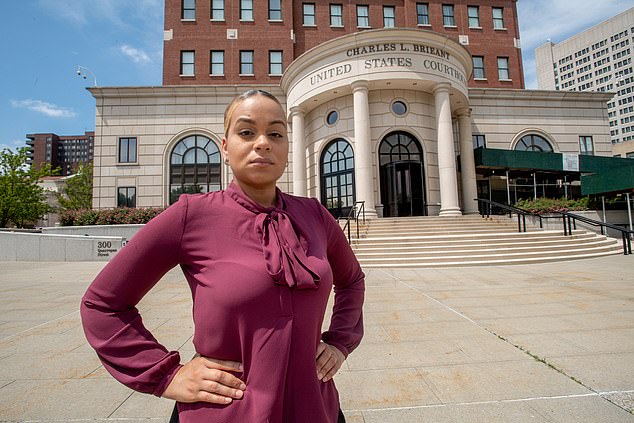 During the pandemic, in August 2020, she requested a “reasonable accommodation to work remotely from home due to her disabilities of asthma, heart murmur and anxiety” and included a doctor’s note, the suit says. Her request was denied.

Vasquez has been out on family leave.

“My professionalism exceeds the expectations of that facility,” says Vasquez . “To this day I can’t believe that this happened to me. I didn’t see it coming. It’s disturbing. I’m disgusted and embarrassed.”

Yonkers Mayor Mike Spano named Dodson as his school of the month for March 2018, gushing that “under the leadership of Principal Evelina Medina, [it] is setting the bar in terms of academic achievement and community engagement.”

The lawsuit names the city of Yonkers, the school district, the Dodson and Chavez schools, Medina, assistant principals Cassano and Guzman, and Superintendent Quezada as defendants. It seeks “uncapped” and unspecified damages. 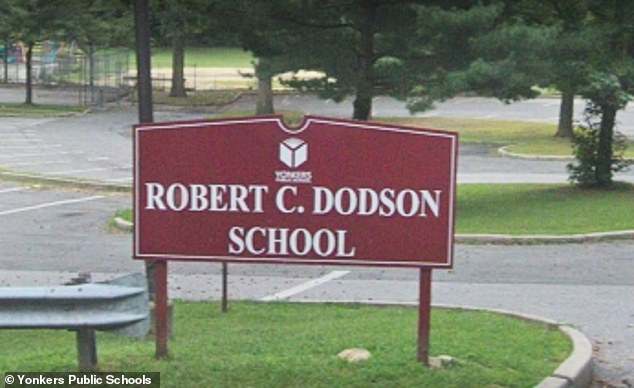 Medina, who made $163,000 in 2019, according to public records, is no longer principal at Dodson. A man answering her phone hung up when a reporter called, and text messages were not returned.

The school district said it would not comment on “pending litigation” and refused to give the circumstances of Medina leaving her Dodson post. Cassano and Guzman could not be reached.