A woman is caught on camera being racist towards a Mexican woman in a restaurant bathroom after she helped her daughter with a wardrobe malfunction. “Why would you let her touch you? She’s trash.” 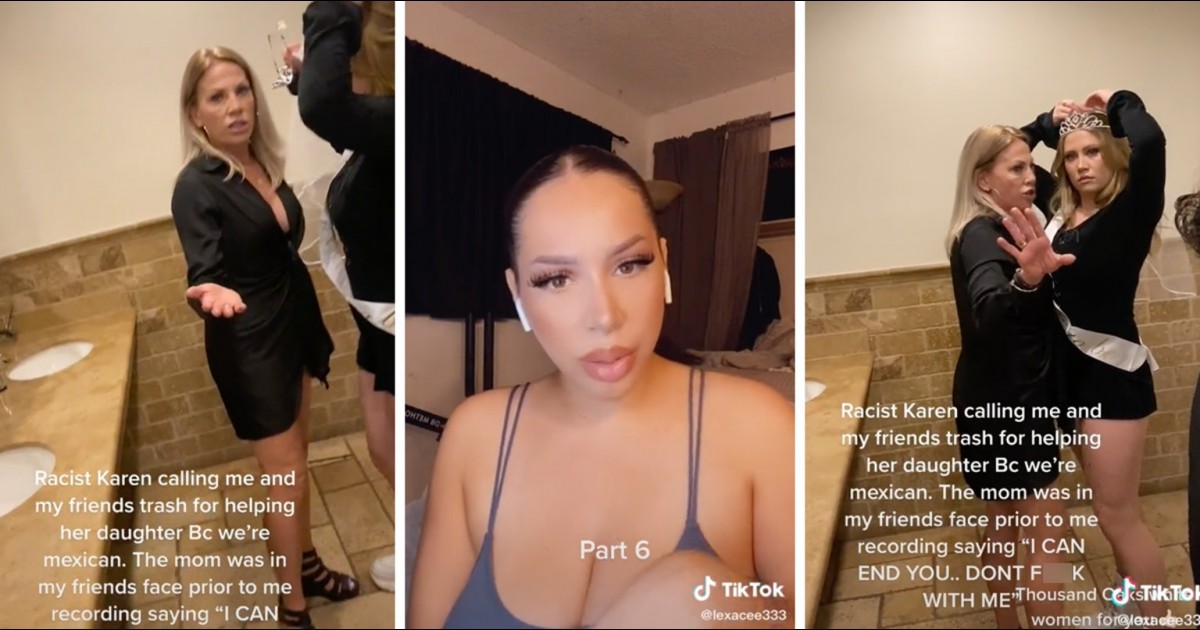 Alexa Carrero and other Mexican women have seen their fair share of racist remarks but being called ‘trash’ by a woman in a restaurant bathroom was a true test of her patience. That too after she had graciously helped the racist’s daughter with a wardrobe malfunction.

##fyp ##thousandoaks I guess being nice and helping someone fix her shirt is only welcomed if you’re white, if not you’re trash🥴

Posting on tiktok, she shows footage of the incident where we see a woman screaming at her own daughter as she fixes a tiara.

The older woman sneers at her daughter and says to her, “Why would you let her touch you? She’s trash.”

This is when Carrero pipes up and says, “I’m not trash for helping your daughter.”

The older woman says trash once again as the daughter has no reaction to the situation at all. Text over the video says, “Racist Karen calling me and my friends trash for helping her daughter because we’re Mexican. The mom was in my friends face prior to me recording saying, ‘I can end you. Don’t fuck with me.’”

Carrero said that prior to the recording, she had seen the younger woman struggling with her shirt and asked if she needed help. When the girl said that she did, Carrero and her friend stepped forward to help.

The mother then started demanding that Carrero and her friends leave the bathroom which they refused to do.

Internet sleuths later discovered that the younger woman that was so apathetic to the situation was in fact an aspiring singer and that the mother was in fact her manager.

The mother and daughter duo, Madison Wolf Kennedy and Tracy Hughes Wolf immediately put their social media on private after being called out.

Carrero also revealed that their racist behaviour did not end in the bathroom but that the mother continued to make racist comments throughout the night as they kept running into each other at the small restaurant.

Carrero and her friends were later asked to leave the establishment at the complaint of the mother. At this point Carrero played the footage of the incident for them, proving they had not been violent or aggressive towards the two women.

Management however still escorted Carrero’s party off the premises while the two women were allowed to stay.

Carrero made several follow up videos telling her experience but did not take any more recordings of the incident. She said that she did not expect that she needed further proof of her experience of racism and was just trying to protect herself rather than ‘bring receipts’

Commenters were annoyed at the younger woman who did not intervene after accepting help from Carrero in the first place.

They also speculated that the two wouldn't have made their accounts private if they hadn't expected backlash at a situation like this.

Commenters also pointed out that racists often don't consider their actions to be such.

One commenter also pointed out how 'white tears' lead to them being escorted out.

'White tears' is when white females (or males) use their perceived innocence and weaponise their tears to project a fictional scenario where they feel 'threatened' by people of colour.

Ultimately people were glad that she was able to record as much as she did.